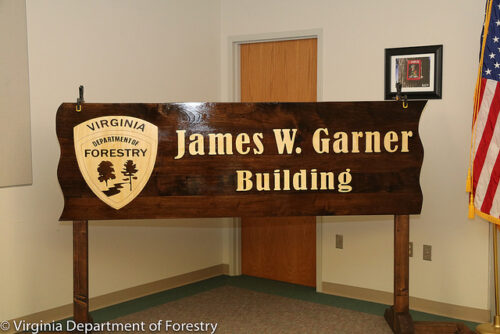 The Virginia Department of Forestry (VDOF) dedicated and named its headquarters office the James W. Garner Building. Jim Garner served VDOF for more than four decades. He was appointed Virginia State Forester in 1984 and held that position for 21 years.

During Garner’s tenure with VDOF, the agency enjoyed significant success and under his leadership, Forestry grew from a state division to a state agency. “Jim’s vision, wisdom and guidance directly influenced VDOF’s current position as a leader within the forestry sector, and a vital partner among other natural resource agencies and organizations,” said State Forester Rob Farrell.

VDOF’s history is rooted in Charlottesville. The first office was on the University of Virginia campus. The land upon which today’s headquarters stands was originally a VDOF nursery. The site was cleared for construction in 1992 and the building was completed in the spring of 1994. The 32-acre campus also includes an educational nature trail and borders a section of the Rivanna Trail.

“Great thought and planning went into the creation of this building,” said Farrell, “and the benefits extend beyond those who work here. Many state agencies and organizations hold meetings and trainings in the building and the reopening of Aroma’s restaurant on the premises is a great draw for people throughout the Charlottesville area. It really is a wonderful place for partners to work together to care for and promote Virginia’s natural resources.” 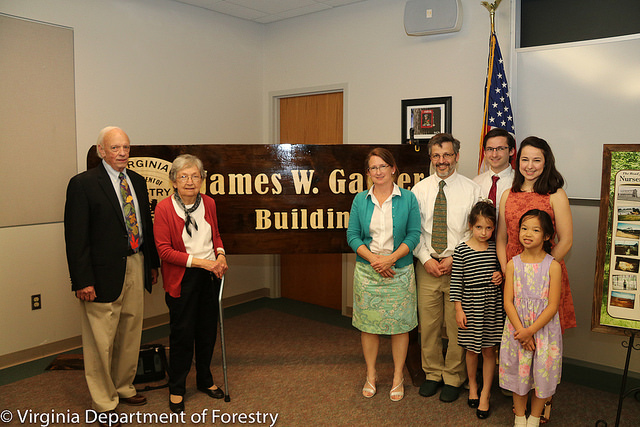 Garner and his family at the dedication ceremony

Garner, a native of Amherst County,  says he is honored and “a little embarrassed” by the dedication in his name. “It is a tremendous honor, but there are so many people who were instrumental in making this building a reality besides me,” he said. “Without the dedicated VDOF employees I worked with over the years and the support of my family, the story would be very different. I am grateful to all of them and very pleased with the good work VDOF continues to do across Virginia.”