Field Notes: A Crop of Cones 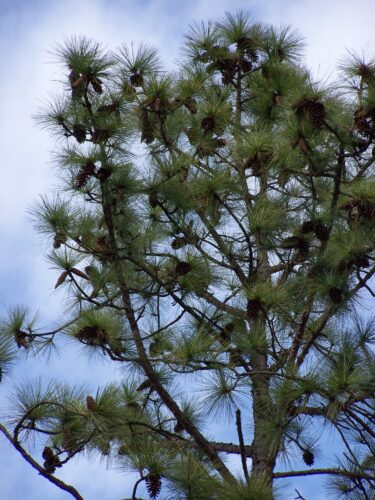 Pine cones, indeed. The 2020 longleaf pine cone crop was harvested at the Virginia Department of Conservation and Recreation’s (DCR) South Quay Sandhills Natural Area Preserve during the week of October 12 and at the Department of Forestry’s New Kent Forestry Center on October 19.

Why harvest cones? The seeds inside them are the key to restoring a species that was almost gone from our state. The majestic longleaf pine (Pinus palustris) once dominated a wide swath of land from southeastern Virginia across the Southern states to eastern Texas. The fire-dependent longleaf ecosystem was biologically diverse and provided critical habitat to some plants and animals that are now threatened or endangered.

In Virginia, more than a million acres of longleaf disappeared over the last few centuries. The reasons were many: pitch extraction for the naval stores industry, timber harvest to fuel construction, conversion of former pinelands to agriculture, and exclusion of fire by a rapidly growing population. At one time, native Virginia longleaf pine was no longer measured in acres, but in numbers of individual trees. Fortunately, the Virginia Longleaf Pine Cooperators Group – including government agencies, universities, and nonprofits – has worked along with private landowners to restore this valuable tree to much of its former range. Today Virginia has 8000 acres of longleaf…and counting.

Longleaf cone production is notoriously inconsistent, and 2020 validated this observation. About 100 trees at South Quay produce cones in a typical year, but 2020 turned out to be anything but typical. Early field predictions for longleaf cone production in the Southeast were described as ‘minimal’, ‘well below normal’ or even ‘non-existent’. While about 75 trees at South Quay were scouted, only 25 trees had enough cones to harvest, producing only five bushels of cones. Another three bushels of longleaf cones were harvested at New Kent. Unfortunately, the low harvest will limit the number of Virginia native longleaf seedlings produced at Garland Gray Nursery next year. (The nursery grows longleaf seedlings from “northern source” trees, because research has shown they possess characteristics that enhance growth and survival in the northern part of the tree’s range.)

For more information on the battle to save longleaf pine, read VDOF’s restoration report. Want to be a part of the recovery? If you live in southeastern Virginia and think your land might be a good candidate for growing longleaf, contact your local VDOF office to learn more.