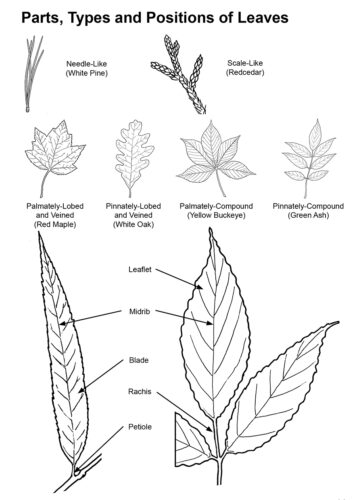 There are many reasons to learn the identity of the trees around us. The trees growing on a site can tell us a lot about the soil, climate, and other environmental conditions there. Certain trees make good lumber, paper, medicines, food, or other products we need. Some animals rely on particular trees for food or shelter. Other plants in a forest may grow best in the shade of certain types of trees. Sometimes trees from other parts of the world become invasive, crowd out native trees, and need to be removed. When we choose trees for landscaping, it is helpful to know which trees might grow best there and what their specific needs are. And of course, some of us just like to increase our knowledge of the natural world!

Trees can be identified by many features, including leaves, bark, fruits, and buds. Using an identification key is a great way to hone your observation skills and learn the names of trees. You can also check out tree pictures and descriptions in a field guide.

Here are some basic tips for identifying trees at different times of the year. For help with terminology, check out the glossary. 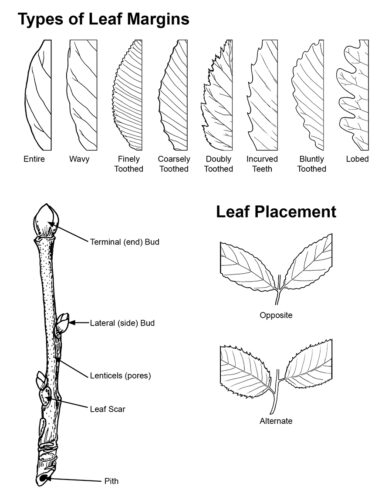 Leaves may be deciduous (shedding in the fall) or evergreen (present all year). Leaves have several features that can be diagnostic for identification.

Opposite leaves are attached directly across from each other on the stem, so there are two leaves at each node, or attachment point.

Alternate leaves have only one leaf at each attachment point; the leaves alternate along the stem in a zigzag or spiral pattern.

Tip: For spring observation, look at older portions of stems instead of the ends, where newly emerging leaves may appear crowded together.

For trees with needles instead of leaves, observe whether the needles are single or grouped into bundles, and how many are in each bundle.

Leaves may be simple, with a single blade; or compound, with 3 or more leaflets attached along a flexible, stem-like rachis.

A compound leaf may be pinnate, with leaflets branching off one main central vein, or palmate, with multiple leaflets originating from a single point.

Leaf shapes vary widely among species. Some leaves have a fairly simple outline, such as an oval. Others have projections called lobes, which give them a wavy or spiky outline. The margins, or edges, of leaves may be smooth or jagged.

Needles come in different lengths and thicknesses. In some species, needles are very short, appressed tightly against the stem, and overlapping, so they appear scale-like.

Bark
Bark can be used to identify many trees year-round, but it is especially useful after leaf drop. Bark is usually described by color and texture, and texture descriptions are often subjective rather than technical. For example, bark may be described as rough, smooth, ridged, furrowed, interlaced, platy, scaly, shaggy, warty, or blocky.

Twigs
A twig’s buds will become the next spring’s leaves or flowers. Buds have diagnostic features such as scales, distinctive shapes, and overall size. Leaf scars occur where the previous year’s leaves were attached, and are thus arranged in opposite or alternate fashion, an important clue to identification. Other twig characteristics include thickness, color, and special features such as thorns, pores, or scents. Even the pith at the center of a twig is distinctive; it can be viewed by carefully splitting the twig along its length.

Tip: A 5-10x hand lens is helpful when examining twigs for tree identification.

Flowering and fruiting time, and the form of flowers themselves, varies greatly by species. Wind-pollinated trees tend to have inconspicuous flowers that release large amounts of pollen in spring. Those that are insect-pollinated may be showy or scented.

Fruits are the structures that house the seeds of most trees. They include such varied items as berries, nuts in hard husks, pods, spiky balls, and even papery shells. Conifers do not technically produce fruit, but they bear cones or similar structures that release the seeds.

Other features to consider when identifying trees are: