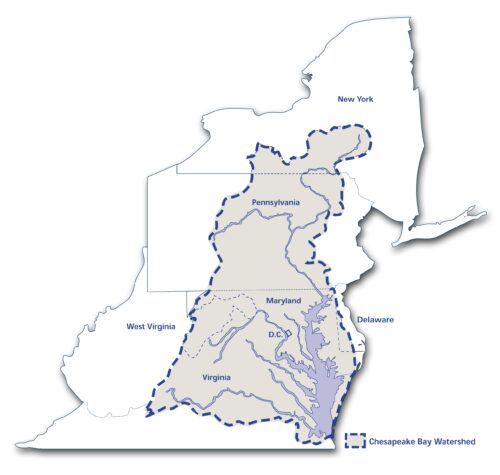 Virginia, Maryland, Pennsylvania, New York, Delaware, West Virginia, and the District of Columbia are jurisdictions that comprise the 64,000 square mile area that drains water into the Chesapeake Bay. Chesapeake Bay restoration efforts began in 1970 with $27 million from Congress to do a five-year study of the loss of wildlife and aquatic life in the Chesapeake Bay. In 1980, the study was published identifying the cause of bay decline to be excess nutrient pollution stemming primarily from land use changes.

Sixty percent of the Virginia Commonwealth is in the Chesapeake Bay watershed. Virginia has four major rivers that drain directly into the Chesapeake Bay: the Potomac, Rappahannock, York, and the James. The 1983 Environmental Protection Agency’s (EPA) Chesapeake Bay Agreement set the goal to reduce pollution and restore the bay watershed. To be successful, the restoration efforts needed the cooperation of the states with rivers and streams draining into the bay and the assistance of landowners within the bay watershed. The governors of Virginia (Chuck Robb, at that time), Pennsylvania, and Maryland, along with the mayor of the District of Columbia, signed the Environmental Protection Agency’s Bay Agreement, committing them to help with bay cleanup efforts. The citizens living in these jurisdictions were called upon to do their part, being asked to:

These actions started at local levels because everything flows downhill. Happy Creek in the photo is an example of a local Virginia stream that is connected to the Bay.

It is a huge responsibility for all in the bay watershed to participate in the clean-up process.

Why the Bay Matters

The Bay supports an economically-important fishing industry for the East Coast and the famous Chesapeake blue crabs are shipped around the world. Many Virginians eat sea food produced by the bay and others spend recreational time within the bay waters and shores. There are a multitude of people that benefit from having a cleaner Chesapeake Bay and tributaries.

The original restoration intentions were sincere but fell short of the considerable pollution reductions needed. Consequently, in 2010, the EPA established the Chesapeake Bay Total Maximum Daily Load (TMDL) setting limits on the amount of nutrients and sediment that can flow into the bay from its tributary rivers and streams. To align with the TMDL limits, the Bay jurisdictions developed Watershed Implementation Plans (WIPs) that detail how each jurisdiction will meet the needed pollution reductions by 2025. For Virginia’s most recent WIP Plan, visit Virginia DEQ Phase III WIP – this explains the actions of localities in Virginia that will lead to cleaner rivers and streams and ultimately a cleaner Chesapeake Bay. The Chesapeake Bay Watershed Agreement has been renewed in subsequent years and was amended on January 24, 2020. For the first time, the bay’s headwater states, West Virginia origin of the Potomac River, New York, and Delaware joined in full partnership to restore the Bay and its’ tributaries. 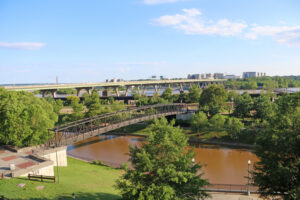 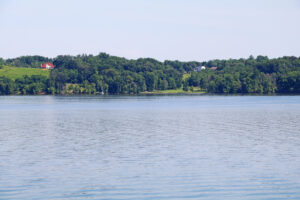 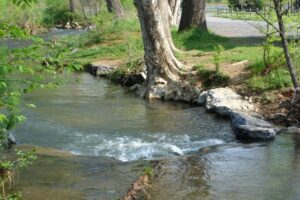