South Quay State Forest covers 266 acres in the city of Suffolk. Quay is pronounced “key” and refers to the former wharf on the Blackwater River. The forest is managed primarily for timber production and re-establishment of a longleaf pine (Pinus palustris) ecosystem.

The forest lies on a lowland terrace marbled with pocosin type wetlands. Excessively sandy soils with low fertility are common on the property. Notwithstanding its proximity to the urbanized City of Franklin, it is still a remote location with limited access. It lies east of the Blackwater River and west of a 1,600-acre water impoundment used by International Paper as the holding pond for their paper mill effluent in Franklin, Virginia. The property also contains nearly a mile of intermittent streams.

This forest lies within the boundaries of the Virginia Department of Conservation and Recreation’s (DCR) South Quay Sandhills Natural Area Preserve. The proximity of these two properties allows for a cooperative management effort by VDOF and DCR for restoring longleaf pine, a diminished species in Virginia.

The South Quay property was used for years by Union Camp Corporation to feed wood to their Franklin mill. In 2013, VDOF used Forest Legacy funds to purchase the property from Bear Deal, LLC. A condition of the deed requires that 75% of the property remain forested. The property transfer came essentially at the same time as a 3,586-acre land purchase by DCR’s Division of Natural Heritage, to be known as South Quay Sandhills Natural Area Preserve. The preserve completely surrounds the state forest property and includes one of Virginia’s last remaining, naturally occurring, native stands of longleaf pine. This stand contains less than 100 longleaf pine trees, which pales in comparison to historical estimates of hundreds of millions of trees that once occupied almost 1.5 million acres in Virginia’s southeastern Coastal plain and Piedmont provinces. Four of the pines are actually growing on state forest property. DNA tests conducted by the USDA have confirmed that these longleaf pines are native Virginia trees and not trees that originated from a nursery in some other state.

The history of European influence in America begins here in this general area of Virginia and North Carolina. An engraved map by Theodore de Bry, published in 1590, shows two rivers flowing into the Chowan River, which can hardly be taken for any but the Blackwater and Nottoway. South Quay gained some measure of notoriety as a port and shipyard during the Revolutionary War. At least two vessels were built here at the direction of Patrick Henry, the Governor of Virginia at the time. They were used in the defense of the North Carolina coast but with minimal effect.

The South Quay port on the Blackwater River was one of the few ports left open for the patriot’s use as most of the major ports in America were blockaded by the British Navy. Thomas Jefferson was intent on keeping this backdoor waterway open. He knew how remote and unsuitable South Quay was with its long, slow approach from the sea and 25-mile wagon train transport to Suffolk, which had been described as the chief military depot in Virginia during the late months of the war. But he also knew that it had the distinct advantage of being hard for the enemy to get at. It was remote then, and is only slightly less remote today. 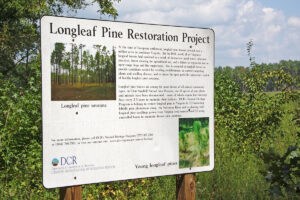 Given the existence of one of the last remaining native Virginia stands of longleaf pine on the neighboring DCR property, and the suitability of the soils to support a longleaf stand, VDOF plans to use this forest to help its goal of re-establishing this diminished species onto the landscape. The hope is to establish a true longleaf pine ecosystem. The isolation of these properties is an asset, since regular prescribed fire is needed to maintain this ecosystem. Successful long-term management will involve cooperation among the VDOF’s partners, including International Paper, Virginia Department of Conservation and Recreation, U.S. Fish and Wildlife Service, and The Nature Conservancy.

Not available at this time.

Educational Opportunities
Not available at this time.