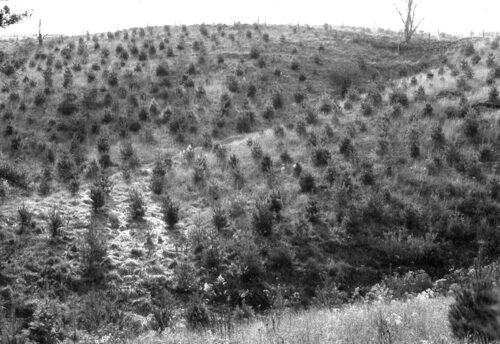 Virginia is a state rich in history and its forests have been affected by the natural environment, climate, and heavily by the influence of humans. Ice ages that affected North America also influenced the trees that grow in Virginia. Trees now commonly found in the far north like spruce and fir can still be found today in the highest elevations. As the ice age ended and cold temperatures retreated northward, Virginia began to warm eventually leading to the mixed temperate forests we see today.

Native Americans used fire extensively to create conditions suitable for wildlife, hunting, and farming. Virginia’s forests were more open and had species adapted to fire, like oaks and yellow pines. Forests were both a resource and impediment to the European settlers. Wood was used to build and support settlement, to export, or was simply burned to make way for farming. Extensive forest clearing was done for farming and by the mid-1800s, most lands that were not too steep to plow or graze had been cleared.

Repeated cropping and erosion depleted the soil to the point where the land was eventually abandoned. After the land was abandoned, the natural process of plant or forest succession began to occur. This begins with weeds, grasses, and shrubs followed by pioneer trees until these abandoned lands naturally returned to forest.

Major social or economic events also had a profound effect on Virginia forestlands. The Civil War had a great impact on the forests due to the wood needed for the armies. The rapid industrial expansion of the late 1800s to 1920 and World War I resulted in record lumber and charcoal production. Mountain forests were heavily cutover leaving harvesting slash that fed uncontrolled wildfires. Concern over the forest loss resulted in conservation efforts like the creation of the State Forestry agency, fire control, and tree planting, all aiding in the recovery of Virginia forests.

During the Great Depression, people moved to cities resulting in idle lands again returning to forests. World War II and the subsequent population boom led to an increased need for forest products, supplied by Virginia’s second- or third-growth forests. To help meet future wood demands, paper mills acquired land and began their reforestation efforts. Growing markets for paper, packaging, and pallets created a use for smaller trees that had been formerly left in the woods. This, and the improvement of logging equipment has resulted in better wood utilization and cleaner harvested sites, facilitating tree planting with pine or setting the stage for vigorous natural regrowth.

Good forest management, starting with informed landowners, planning, and purposeful implementation of practices, continues to shape the present and future forests of Virginia.