A Walk at Whitney 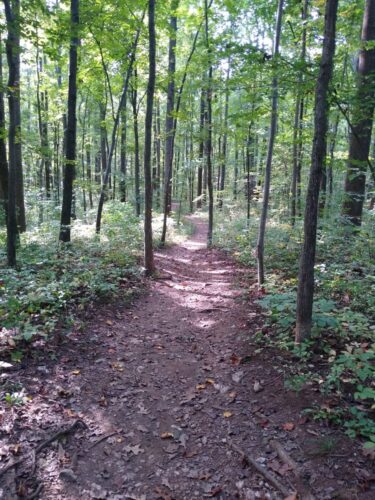 Last week I took a hike at Whitney State Forest, located in Fauquier County, just south of Warrenton. I was a little early for brilliant fall colors, but right on time for another kind of “fall.” There were loads of nuts on the ground, one of the hallmarks of autumn in a Piedmont oak-hickory forest. 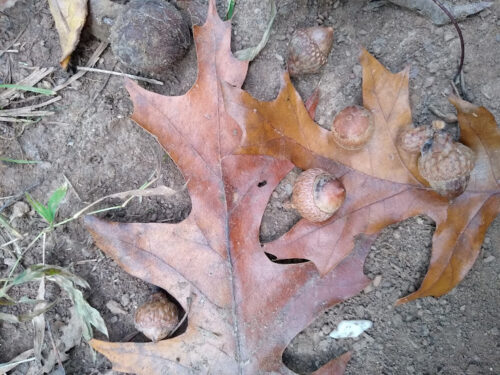 Known in wildlife circles as hard mast, nuts provide a high-fat, high-protein food source for animals heading into winter. Bears are famous for “fattening up” on hard mast before entering their winter dens, and every hunter knows that deer gorge on autumn’s acorns. Turkeys, jays, woodpeckers, and even some ducks love acorns too. Squirrels and mice cache all sorts of nuts for feeding when the weather is rough.

Whitney State Forest has a number of trails crisscrossing its 148 acres – about seven miles in all, without much elevation change, which makes the walking easy. The first thing I noticed was the large number of hickory trees, and I immediately wished I had visited a couple of weeks later. Hickories are one of my favorite trees for fall color; they turn a golden yellow that seems to glow from within.

From a tree identification standpoint, I find hickories challenging. It’s not hard to tell that it’s a hickory, but it can be tricky to determine which hickory. There is a lot of variation among individuals of a species, and natural hybridization between species results in confusing characteristics. (This is maddening when one is leading a tree walk and everyone expects perfect tree wisdom.)

Whitney State Forest definitely has a number of mockernut hickories (Carya tomentosa). This species has a four-ribbed nut with a thick husk, most leaves with seven leaflets, and tight bark with an interlaced pattern. 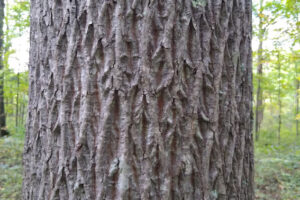 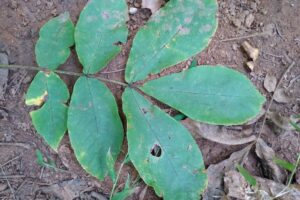 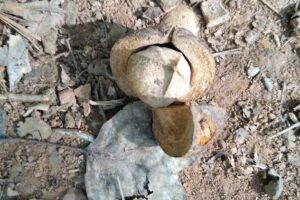 Another common species is pignut hickory (Carya glabra). It has a smooth, oval nut with a thin husk, and most leaves have five leaflets. The bark is somewhat variable but tends to be flakier than that of mockernut hickory. 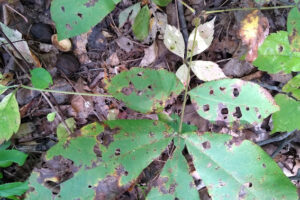 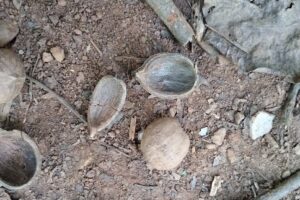 Red hickory (Carya ovalis) can also be found on the forest. In dendrology class at North Carolina State University, we didn’t learn this species – probably because at that time, it was considered a subspecies of pignut hickory. Red hickory has a thin-husked nut similar to pignut, but it tends to have seven leaflets and shaggier bark. 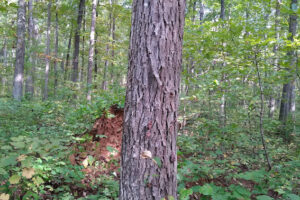 Other hard mast-bearing species I saw on my walk were black walnut (Juglans nigra), hazelnut (Corylus americana), and even one Chinese chestnut (Castanea mollissima). Whitney State Forest has a good number of oaks too. These are much easier to identify to species, especially when acorns are present. Describing – and praising – all the oaks would take a lot of space, so they’ll get a post of their own another day.

I’ve said many times that State Forests are a well-kept secret. They may not have the amenities of State Parks, but if it’s nature you want, nature you will get. On a Tuesday afternoon, the Whitney was a peaceful place. I saw only one dog walker, two mountain bikers, and one fellow nature nerd crouching by a stream with field guide in hand. In most cases, State Forests are working lands that are sustainably managed for forest products while still providing benefits such as wildlife habitat, air and water quality, recreational spaces, and more. Most of Virginia’s State Forests are accessible to the public, and autumn is a lovely time to visit. Just watch out for falling nuts! 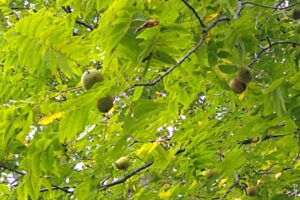 Don’t stand under a walnut for too long in the fall. Ouch!