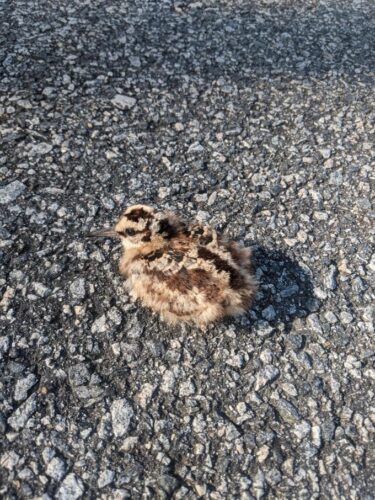 Now that it’s April I will declare that spring is officially here in southeastern Virginia!

Earlier this month, I was traveling a back road in Southampton County when ahead I saw a line of small objects on the highway. As I got closer, I could see they were birds. The lead bird was larger than the four that followed. My first thought was that they were quail, and being a quail enthusiast, I thought it was unusual to see a family of quail this time of year. As I got closer, I realized these were not quail, but a family of American woodcock! The lead bird was the adult female, with four young of the year in tow.

I slowed my vehicle and stopped before I reached the small family. The adult bird hopped off into the mature pine forest on the far side of the road. The hatchlings, however, simply squatted down in the middle of the road. I got out of the truck and, after taking a close up of one of the chicks, herded the young birds off the road in the direction of their mother. 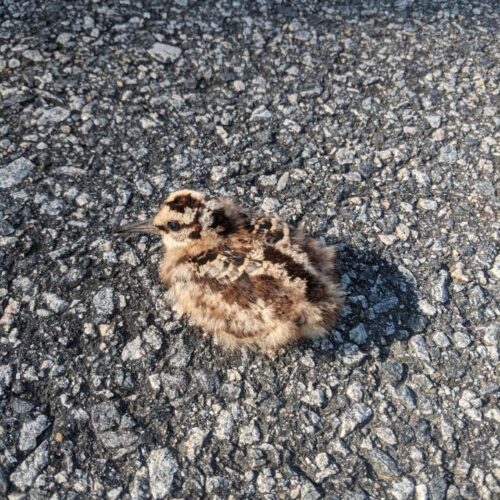 I have seen plenty of adult woodcock (Scolopax minor, also known as timberdoodle and several other names) in my work as a forester and as a quail hunter. They are a federally regulated migratory game bird common in Virginia during the winter months. The birds we see in the winter, I have assumed, migrated from more northern states in search of ice free habitat. During hunting season, I expect to see more woodcock when bad weather up north forces these long-range travelers south. Growing up in western Pennsylvania, I remember seeing woodcock in the fall. They were associated with swampy areas and known for making a funny chirping sound when flying. 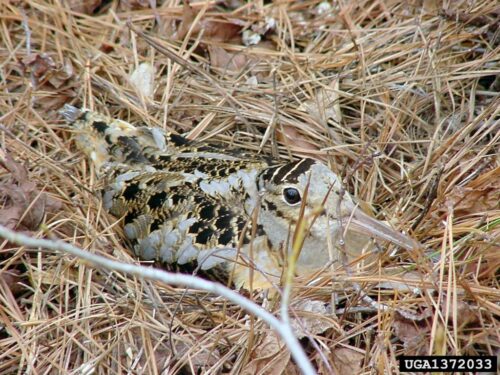 I had never seen a young woodcock, so I decided to do a little reading. According to the Audubon Society’s website, these plump birds call many different habitats home, but prefer moist forest thickets and brush as well as open fields. To feed, they probe the moist soils with their very long bill, which has a flexible tip to allow grabbing worms and other organisms under the soil.

Still curious about their presence in the spring, I contacted Marc Puckett, a friend, hunting partner, and small game biologist with the Virginia Department of Wildlife Resources (DWR). While Marc is best known for his work with quail, he also knows some about woodcock and enjoys hunting them. He told me that, while all woodcock migrate at some point, occurring from Canada all the way to Louisiana at varying times of year, we have some woodcock that act almost like local birds. They spend a great deal of time in Virginia, from fall until early summer in some cases. And woodcock do nest here, with some nests documented as early as late January, even with snow on the ground! They prefer to nest in thick cover, typically regenerating forest lands. Little is known about these woodcock that behave somewhat like residents. A study is currently being coordinated in Virginia by Dr. Gary Costanzo, the DWR migratory gamebird biologist. Stay tuned to the DWR website for information about results of the ongoing study.

While woodcock are fascinating birds in nearly every respect, particularly interesting is the male mating display that occurs prior to nesting. Males may gather in open areas and give “peent” calls prior to flying straight up in the air, then twisting back to the ground to attract females.  Males have special feathers on their wings that make them whistle during their flight, and the tips of their tail feathers on the underside are bright white to help the females see them during their ground display. (They strut much like a turkey gobbler!) Honestly, I don’t think I have ever seen this, and you may not have either. This interesting ritual takes place in February or March, beginning in the late evening and continuing until after dark. It also may be repeated in the early morning hours, concluding before full light.

It’s good to know that in the darkest, coldest days of winter in Virginia, the American woodcock and its unique mating flights are predicting the coming of spring and the renewal of life in the forest. Like many other forest dwelling animals, however, their population levels may be falling on the East Coast due to habitat degradation and loss. Forest management, therefore, is an important tool for woodcock habitat improvement. Your local Department of Forestry staff can connect you with a biologist that can help you if you are interested in woodcock management on your land.