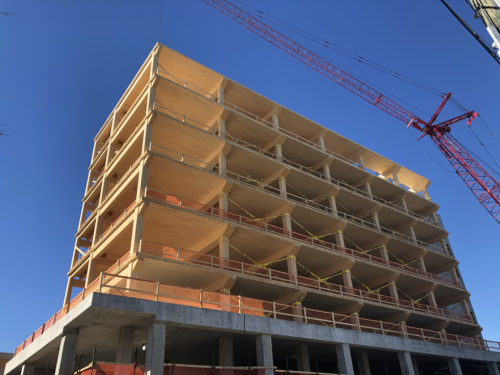 During a sunny March morning, a team from the Virginia Department of Forestry (VDOF) and the Virginia Department of Agricultural Consumer Services (VDACS) toured an exciting mass timber construction project in downtown Charlottesville, Virginia. The building will eventually house the headquarters office of Apex Clean Energy – a locally-based wind and solar energy company – as well as headquarters for Hourigan Development and Riverbend Development.

Contemporary mass timber construction has become an increasingly desirable option for sustainability-focused clients. Eric Ross of William McDonough + Partners explained that his firm works with a number of clients – both in the United States and internationally – that choose mass timber construction for sustainability, function, safety, and aesthetics.

Mass timber structures serve as sustainable carbon solutions throughout their entire lifecycle. Trees grown for mass timber products are a renewable resource; they will capture and store carbon until they are harvested, at which point new trees are planted to replace them. The resulting wood products, such as boards and beams, will continue to sequester carbon for decades beyond the harvest.

The use of mass timber materials goes beyond the lifecycle as a building. Typically, when a building reaches the end of its use, it’s demolished and the debris is sent to a landfill. Wood materials in mass timber construction are prefabricated and assembled in ways that extend their usefulness – certain materials can be disassembled and reused in the wood industry.

Concerns about fire protection once limited the use of timber in certain tiers of building codes – a legitimate concern (as wood is combustible) that mass timber manufacturers have taken seriously. Frequent fire rating studies have demonstrated that mass timber materials meet or exceed standards for fire safety in certain tiers of construction. Because the laminated beams are so thick, only the surface will char when against flames. The standard glue used in CLT and glulam products contains fire retardants to protect against longer burning fires. The manufacturers continue work to improve the efficacy and environmental impact of chemicals in the glue.

So, what’s it like working with CLT and glulam in construction? The Apex building project team agreed that cost and effort are comparable to using other materials (such as steel or concrete), and in some aspects easier or quicker. As projects become more common, everyone learns and the process improves, says Ross.

Because mass timber is rising in popularity, you need to lock in requests for prefabricated materials very early on in the process. The prefab nature of the materials inherently requires plenty of up-front design work and limits the ability to make changes during construction; but the structures can also be erected more quickly. The necessary collaboration and engagement among building owners, architects, designers, manufacturers, and construction crews ultimately results in superior project outcomes.

The wood in the Apex building will largely remain exposed as a design feature – a notable benefit of working with CLT. Building owners of mass timber structures often decide to leave portions of the wood (such as structural beams and ceilings) exposed for aesthetic purposes. This saves both time and cost during the finishing process.

The wood used in this structure is black spruce sourced from Canada. Both the VDOF team and the building crews believe that mass timber has a strong future in the southeastern United States, where native softwood species are comparable to black spruce.

Given how much foresters love trees – and by extension, wood – it’s no surprise that the VDOF team was enthusiastic about seeing this distinctive project in person. “Quite simply, it’s really exciting to see such a large structure being built with wood in our state,” says Virginia’s State Forester Rob Farrell. At six stories and more than 130,000 square feet, the Apex building will be the tallest mass timber structure in Virginia. “I’m looking forward to seeing more of this construction in our region and for Virginia to serve as a leader for sustainable mass timber production,” says Farrell.

View a time-lapse of the building’s construction process.