Field Notes: Be Thankful for the Good Bugs! 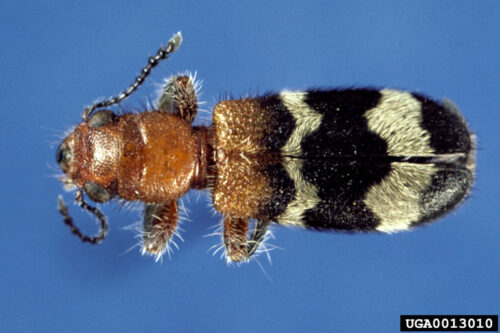 Here in the forest health program at VDOF, we spend a lot of time talking about bad bugs and how to kill them. Much of our time working with landowners and other forestry professionals is spent identifying pests, giving management recommendations and, in some cases, even treating trees against a variety of problematic insects. The emerald ash borer, an insect that originates in Asia, received a lot of our attention this year. Gypsy moth, a pest from Europe, typically makes an appearance each year in early spring and caused moderate damage in 2018. We also can’t forget our newest invasive insect, the spotted lanternfly! This pest showed up in the state in January of 2018 and has been the source of much attention and control efforts ever since. Sometimes it is exhausting trying to keep up with these invaders as they make themselves at home in our forests!

Given it is the holiday season, a time to be thankful for all that we have, I want to shift focus off these nuisance species, and celebrate the good bugs. They don’t often get the credit they deserve, even though they are constantly working hard in the background controlling the “bad bugs”. When these “good bugs” (also called natural enemies) control populations of pest insects, this is called population regulation.  This phenomenon involves a fluctuation of populations that cycle between the high population of an insect pest and the subsequent increase of natural enemy populations. Eventually the natural enemy controls the pest below injury level and to a point where the pest population is less than that of the natural enemy population. In natural systems where both species are native, these population dynamics fluctuate back and forth and remain in balance so long as the ecosystem is not altered (Stevens 2010) (see figure 1). 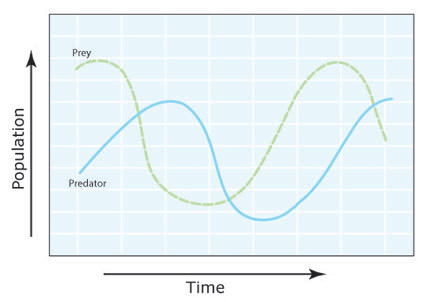 Insects that act as natural control agents can fall in to two different categories- predators and parasitoids, though natural control also encompasses fungi, bacterial and viral pathogens of invertebrates. Predators are insects that rely on their prey as a food source. Sometimes only a certain life stage of an insect is predacious; the larvae may be predators while the adult stage feeds on nectar. Other species are predacious their whole lives, controlling pests constantly! Parasitoids are awesome insects that don’t harm humans, but parasitize other insects when they are young and then are free living as adults. They can parasitize and use their hosts for food or can use them exclusively for homes while they develop! Either way, they ultimately kill the host they rely on. Take away message here- Mother Nature is awesome and clearly there is a lot in the natural world to be thankful for!

One of our favorite native predators here in Virginia is the checkered clerid beetle, Thanasimus dubius (Figure 2). This species is a native predator of the southern pine beetle (SPB), the most destructive native insect in the southeastern U.S. Both the adult and larval stages of this predator feed on all life stages of southern pine beetle, as well as many other native pine beetle species in Virginia. In the VDOF forest health program, we trap annually for SPB and clerid beetles and use the number of clerid beetles as an indicator of SPB population status. If we catch more clerid beetles than SPB, as we have the past few years, we know that the SPB population is at low and static levels and the predators are controlling the SPB. 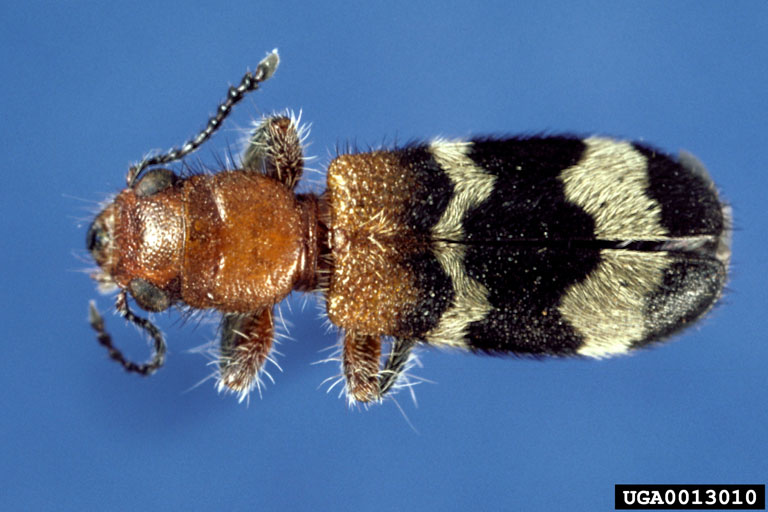 An amazing native parasitoid found in the woods of Virginia is Megarhyssa nortoni, a lovely wasp that looks terrifying but is actually specially adapted to find larvae of a horntail grub underneath bark (Figure 3). She probes the wood trying to catch the scent of the fungi that horntail cultivate. Once she finds a suitable spot, she drills into the tree laying an egg on or near the horntail grub. Once her egg hatches, it consumes the entirety of the horntail grub, killing it. 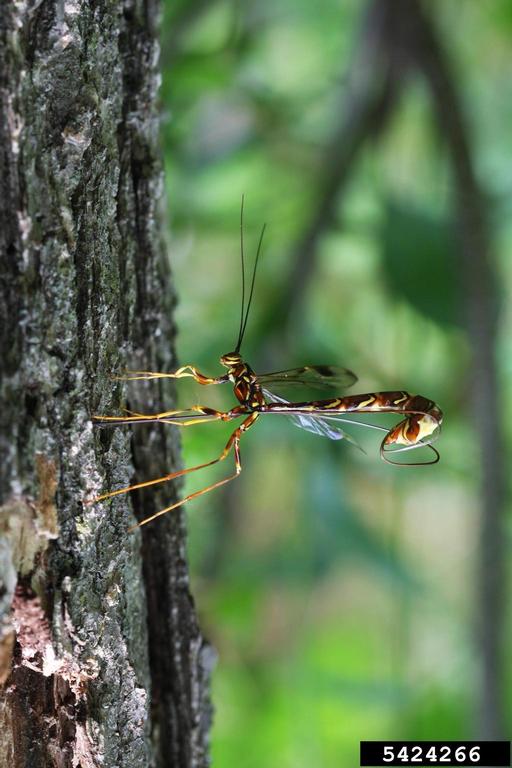 These two examples represent only a very small portion of the natural control going on in our forests around us. All of our native pests are controlled by natural agents that keep the pests from reaching destructive levels for too long. Non-native pests can be so damaging in the U.S. because they arrive without natural predators to keep them under control and they are effectively at a buffet in our forests and ecosystems. So let us toast our good bugs this holiday season and be grateful for all they do in our forests around us!