Centipede-shaped Galleries, Made by a Beetle! 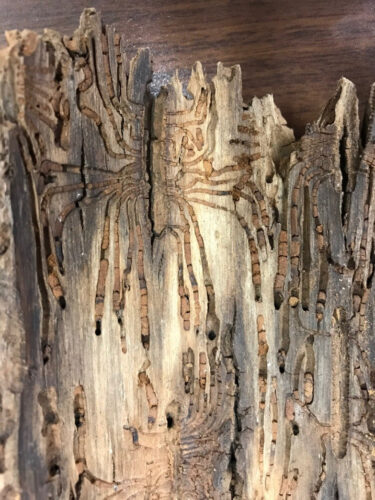 The southern pine beetle typically gets all the attention, but there are other native bark beetles in our forests that often go unnoticed. One such beetle is the hickory bark beetle, Scolytus quadrispinosus. 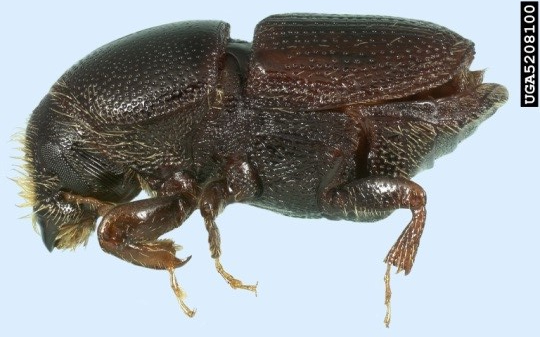 Adults are black, stout, and small – about 1/5 inch long. They fly to the tops of trees and feed on terminal growth, and then bore into the bark of trunks and branches to lay eggs. Females construct vertical egg galleries underneath the bark and deposit eggs  in small niches along either side of the gallery. When the eggs hatch, the larvae mine outwards, away from the main gallery, creating an engraving that resembles a centipede! This peculiar centipede-shaped design is easy to identify and a good indicator of a hickory bark beetle infestation.

The hickory bark beetle prefers hickory trees, although pecan and butternut are also listed as possible hosts. Beetles damage trees by creating galleries underneath the bark that may eventually girdle the tree. Foliage of infested trees will turn yellow, red, and finally brown as the tree succumbs. But not all hickories will die! The hickory bark beetle tends to only attack trees that are already stressed due to drought, fire, storm damage or disease. So keep your trees healthy with good cultural practices, such as thinning and irrigation, and you may never see signs of the hickory bark beetle.