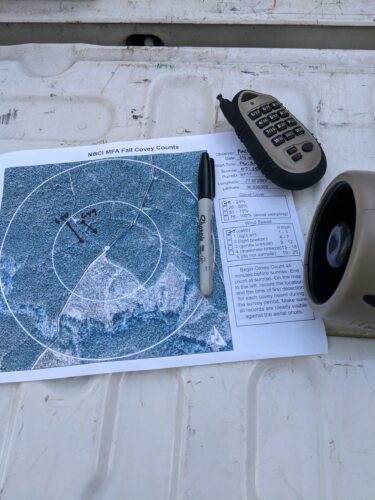 In the pre-dawn hours, Venus and Mars were the brightest objects in the dark sky, save for the crescent moon that, as the old timers might say, was holding water. The occasional satellite could be seen in its telltale unblinking arc streaking across the inky blackness of space. Suddenly, a shooting star blazed west to east before fading out.

Stephen Jasenak and I were not out in the Big Wood State Forest for a star-gazing morning; no, we were here for a much more terrestrial reason. The State Forest, along with the Big Woods Wildlife Management area and the Nature Conservancy’s Piney Grove Preserve, are in aggregate one of two focus areas of the Quail Recovery Initiative in Virginia. Since the 1960’s, Virginia’s quail population has declined by an estimated 70 percent. Much of the reason is that modern farming and land-use practices create unfavorable habitat for quail. Forest management is one tool for bringing back these birds across their native range. You can get more information about bobwhites in Virginia here.

Beginning in mid-October and extending into November is the time to arrive in the forest well before dawn to listen for bobwhite covey calls.  The Virginia Department of Wildlife Resources (formerly Department of Game and Inland Fisheries) leads this effort in hopes of determining how forest management activities are impacting the recovery of quail populations in the focus area. Each ownership is managed in a slightly different way. This may give quail managers a better understanding of the tool sets to implement on client lands in the Commonwealth.

Marc Puckett, a biologist for the Department of Wildlife Resources and a leader in quail conservation, explained to me that in early mornings throughout the fall birds are trying to join together after being separate “families” during the breeding and rearing seasons. During the winter, quail from multiple families group together, or covey up, in order to conserve warmth as well as better avoid predators. Later in the fall, once the covey has been formed, calling will be reduced. If a covey is broken up by a predator in the night they will call back together in the morning, but if the covey is undisturbed they may be silent for the morning.

Conducting a Covey Call Survey is a pretty simple process. Surveyors should arrive at the sample point at least one hour before official sunrise, as the “listening period” begins 45 minutes before sunrise.

For this visit to the forest, 6:30 was the time to begin listening for the distinctive covey call. Twenty minutes later, “Koi-lee” rang out to my west! Moments later another call sounded just south of the first call. Quickly I jotted down the bearing of the calls and the approximate distance from the sample point, along with the time of day, on the data collection map. We strained to hear the next call, but none came before the sun rose above the horizon. At the end of the 45 minute period, we played an electronic recorded call in all four cardinal directions to see if it would stimulate any reluctant birds to answer. Unfortunately, we had no luck that day with the artificial call.  Then it was time to head off for breakfast and the rest of the “real” work for the day.

This was an excellent result for our first morning out. Like a turkey hunter anticipating that first gobble of the morning, there is an elation from hearing a covey call in your habitat. If you are interested in bobwhite quail numbers on your property, you too can conduct a covey count. On a clear morning with little or no wind, head out to your habitat and listen intently. The call is hard to mistake, especially at that time of the morning in autumn, when most birds aren’t singing, or even awake. When you hear a call, you at least know for certain that quail are using your land. How many are there … well, I’m not sure even Marc can tell you that!