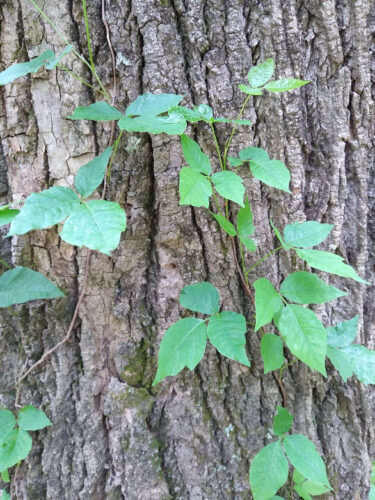 Walking along a forest path this time of year, it’s tempting to reach out and touch all those lush, green leaves. That’s not always a good idea, because Virginia has three species of plants in the genus Toxicodendron. When the botanical name translates to “poison tree,” it’s best to look, not touch.

The most familiar of Virginia’s poisonous plants is poison ivy, Toxicodendron radicans. Found statewide, this species always has compound leaves with three leaflets – hence the saying, “leaflets three, let it be.” The leaves may be reddish and/or shiny when they first emerge in spring, but they lose their glossiness by the time they’re fully expanded. 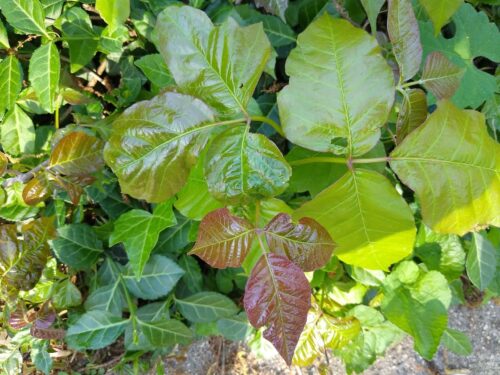 Poison ivy can grow as a climbing or sprawling vine, or occasionally as a short shrub. The vines appear fuzzy, thanks to aerial rootlets that help them cling to trees. In rich, moist soils, vines can get quite thick and climb to the top of the forest canopy. 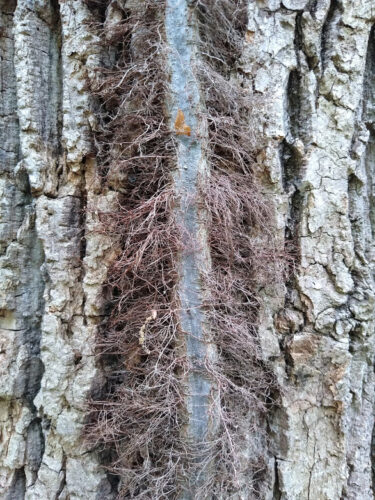 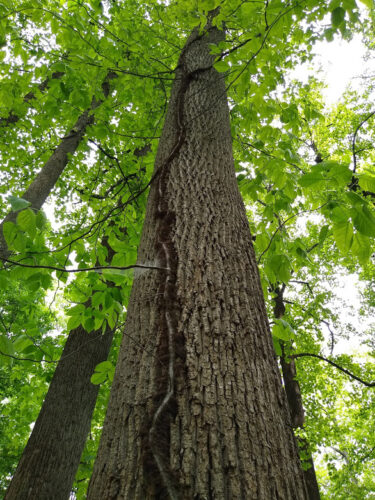 Vine reaching for the sky

Contrary to popular opinion, poison ivy is not an invasive exotic plant; it’s just an aggressive native, especially on rich soils. In many areas, it’s a preferred browse for deer. (No, they don’t get itchy mouths from eating it.) Many songbirds eat the small white berries, spreading the seeds far and wide.

Poison oak (T. pubescens) is less common in Virginia. You’ll find it most often on dry soils, such as sandy or rocky sites. It grows as a short shrub and has leaves with wavy margins, like a white oak leaf. Leaf surfaces may be noticeably fuzzy, especially the undersides.

Poison sumac (T. vernix) is the least common of Virginia’s Toxicodendron species. This plant is most often found around wetland edges in the eastern part of the state. Despite growing up in eastern North Carolina and living for years in eastern Virginia, I’ve never seen poison sumac in the wild. It tends to be a tall shrub or even a small tree. Its leaves, like those of nontoxic sumacs in the genus Rhus, are compound, with 7 to 15 leaflets. The rachis (leaf stem) is often red. Clusters of white berries also distinguish it from the harmless red-berried sumacs.

All Toxicodendron species can cause an itchy rash after contact. There’s a myth that the rash spreads by weeping. It doesn’t. The active chemical, urushiol, is oily; it is easily spread around on skin by your own hands, or by rubbing against clothing, tools, or pets that have touched the plants. Thus, new areas of rash may appear in places you didn’t expect. Using soap and water or a specialized wash as soon as possible after contact will remove the oil from skin and minimize the chance of a rash. 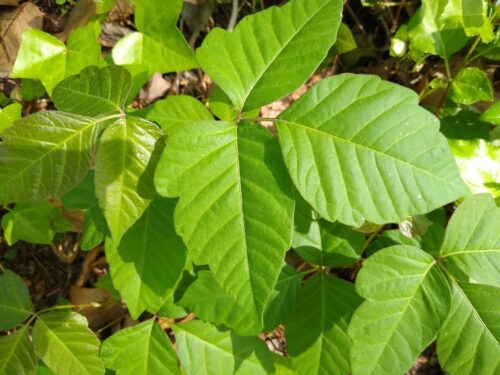 Incidentally, rubbing the leaves of native jewelweeds (Impatiens species) over skin after poison ivy contact is said to remove urushiol. I’ve also heard jewelweed can ease the itch once you have a rash. It probably doesn’t hurt to try it!

If you’re one of the lucky folks who has never gotten poison ivy, you might think you aren’t allergic to it. This may be true, as sensitivity varies among individuals. But reactions to the plant can change over time, especially if you do something…well, foolish. I speak from experience. At age 12, after years of casual brushing against poison ivy while playing in the woods, I bragged to a friend that I was immune to it. To prove my point, I grabbed a poison ivy leaf and scrubbed it against my arm. You can guess what I woke up with the next morning. After that initial reaction, I could no longer touch the plant without getting a rash.

Incidentally, Toxicodendron is not the only genus that can cause itching. For example, trumpet creeper (Campsis radicans), whose orange blooms are a common sight along roadways in summer, is often called cow-itch vine. I’m not sure if it actually irritates cows, but it does cause contact dermatitis in some people who handle the vines. English ivy (Hedera helix), though unrelated to poison ivy, can also cause contact dermatitis. When pulling this invasive plant from your yard, it’s a good idea to wear gloves and long sleeves, just in case. 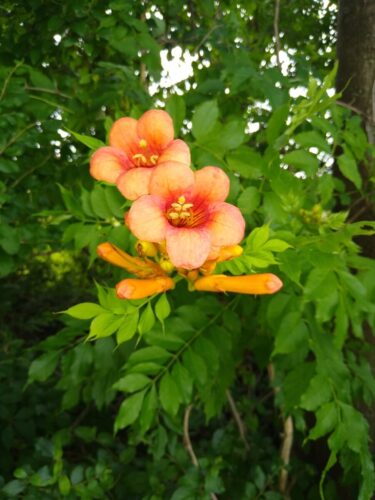 Enjoy the woods this summer, but watch out for those leaflets three!