Field Notes: EAB-Killed Ash – Use It or Lose It! 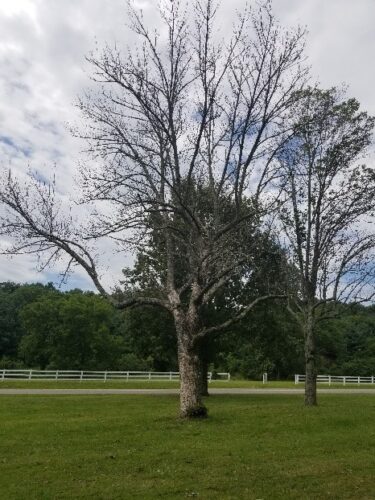 The emerald ash borer (EAB) is an invasive beetle that has decimated native ash trees. It has been present in the U.S. since the late 1990s, feeding on and killing ash in Virginia since initial detection in 2008. This insect is native to Asia and most likely arrived on imported wood packaging material. While named for the metallic green coloring of the adult, it’s the white, segmented larva that destroys the tree by feeding under the bark on the tree’s vascular tissue. This feeding disrupts the movement of water and nutrients within the tree. The ‘S’-shaped feeding galleries the larvae create dry out the inner tissue and make it very brittle. As the tree dies over a two- to three-year period, it continually loses moisture content, becoming drier and more brittle with each passing month.

Symptoms and stress responses from EAB feeding include epicormic sprouting (sprouts coming out of the trunk from dormant buds), crown dieback, woodpecker stripping (they love to eat the larvae!), and ‘D’-shaped exit holes on the bark from where the adults emerge.

Currently, EAB has been confirmed in most counties in Virginia. There are just a few counties in the southeastern part of the state where we have yet to find any life stage of this beetle to send to the State Entomologist for official confirmation.  In areas like northern Virginia and Southside, where EAB has been present for over a decade, most trees that were not chemically treated are now dead. (Visit this interactive dashboard for more information.) In areas where the infestation is still ongoing, some trees will look outwardly healthy but have symptoms of decline. There is typically a lag period from when the beetles first infest an ash to when symptoms begin to show, making it important to plan ahead to treat or remove your tree before it dies! While ash species only makes up about 2% of all forested volume in Virginia, this still comes out to an estimated 187 million ash trees across the state. Additionally, this species can be found in high concentrations in urban and riparian areas, meaning that loss of these trees has a greater localized impact.

Tree fellers have relayed stories about the branches of dead ash breaking and falling as the trees are being cut, or the entire crown “exploding” as it hits the ground. Without question, there must be increased safety awareness when felling EAB-killed ash. Most arboriculture companies will not allow their personnel to climb a dead ash to begin the felling process.

In a recent project at Camp Kum-Ba-Yah in Lynchburg, VDOF personnel assisted local arborists with an ash removal project. While the arborists dismantled the trees near structures, VDOF sawyers felled the dead ash located in the woods that were adjacent to trails and other remote recreational facilities. Most all of these ash did not leaf out in 2020. VDOF project leader Bill Perry indicated that only smaller branches (2” or less) broke apart when the tree hit the ground. He also noted there was no breakage or cracking of the trunks. Bill also provided the following advice when felling these dead ash trees: “I was skeptical of using an open-face notch (90 degree) and leaving a heavy hinge. The trees are very quick to split up the trunk. Using a 45-degree face notch and a stump shot with a thinner hinge was giving me good results. I was not heavy wedging any of the trees for fear of wood quality.”

Ash trees killed by the EAB can still make a quality lumber product. The main takeaway is to mill these dying/dead trees as soon as possible for two reasons: the safety of the tree feller, and the integrity of the wood. Also remember that the EAB is not a deep boring insect. Most of the damage done by EAB activity is removed as the outside bark slabs are sawed from the log. If you’re searching for a portable sawmiller to process ash logs, check out the Urban and Small Woodlot Forestry Business Directory, where over 45 are listed.

Scientists are working hard to help protect ash in the long term. Researchers at the USDA Forest Service are working on studying the genetics of seemingly resistant trees. There are also national seed collection banks that are collecting seeds of all ash species, in order to preserve a seed source to replant the landscape once the first wave of EAB attack has subsided. In the meantime, VDOF is working to treat as many ash trees as possible with insecticides and to release small, host-specific wasps (harmless to humans) to control EAB eggs and larvae. Collectively, the efforts of many are helping to preserve ash across the Virginia landscape.