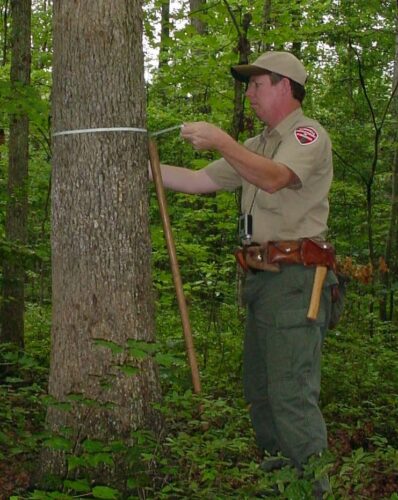 When you read facts about Virginia’s forestland, do you ever wonder where this information comes from? In many cases, the source is the Forest Inventory & Analysis (FIA) program. FIA field crews put boots on the ground to collect information such as the number of acres of forestland (approximately 16 million); the most common forest type (upland hardwood, around 80%); the most common tree species (red maple by number of trees, loblolly pine by volume), and lots more.

A Bit of History

By the early 20th century, much of the virgin forestland of the Upper Midwest, Southern Appalachians and southern longleaf pine forests had been harvested. Nationally, there was concern that a “timber famine” might be coming. In 1928, Congress passed the McSweeney-McNary Act, creating a national Forest Survey to assess the condition of the forest resource. The USDA Forest Service’s research branch was tasked with conducting these surveys. The first Forest Survey of Virginia was published in 1940, with subsequent reports in 1957, 1966, 1985 and 1992.

In the late 1990s, there was a significant shift in the way the Forest Survey – now called Forest Inventory & Analysis – operated. Needing more current information to make resource management decisions, the state forestry agencies in the South began partnering with the USDA Forest Service Forest Inventory & Analysis program, with the states providing the field personnel and the USDA Forest Service providing the structure, processing and reporting. Now, rather than a published report every 7-9 years, there is an annual update posted online, with a more comprehensive report every 5 years.

How does FIA collect data?

The FIA program monitors approximately one plot per 6,000 acres (roughly three miles apart), with around 5,000 total plots in the state. The plots run the gamut of Virginia’s landscape: public and privately owned lands; backyards and remote wilderness areas; young pine plantations and older hardwoods; open park-like stands and brush-choked understories; swamps and steep slopes; recent cut-overs and mature stands. Twenty percent of the plots in each county are re-measured annually, to provide an update on the condition of the forest resource.

FIA field crews are typically made up of one or two people. For each plot, they collect data on land use, ownership type, forest type, stand age, any disturbances or harvesting, invasive plant species, site productivity, and other factors. For individual trees on tally, they record information such as location, species, diameter, crown characteristics, bole quality, tree grade, length of bole and damages.

The use of GPS is a huge help in locating these standing plots. While most plots are simply accessed by driving into the vicinity and hiking in, reaching others can be more complicated. For example, some Great Dismal Swamp National Wildlife Refuge plots require the use of a boat or canoe, and other parts of the state require extensive off-road driving or an ATV. In addition to the typical brush and steep slopes, crews accessing plots in western VA may have to navigate around cliffs, as well as strip mine high walls on the Cumberland Plateau.

Like other VDOF field staff, field crews encounter other challenges in the course of their work. They deal with heat, cold, precipitation, and humidity on a daily basis. They fight through greenbrier, blackberry, rhododendron, mountain laurel, autumn olive, and oriental bittersweet. Then there are the pests: mosquitoes, deer flies, gnats, yellow-jackets, ticks, and chiggers. Sometimes there are exciting wildlife encounters – anything from timber rattlesnakes and copperheads to black bears. Since 80 percent of the plots are on private lands, the crews interact with a wide range of interesting landowners and properties in the course of their work.

Ryan Hewitt, one of VDOF’s FIA specialists, offered his perspective on field work:

I often get asked by other forestry professionals what it’s like being an FIA forester and “doing the same thing, day after day.” The truth is, it is the same every day but your office is constantly changing. One day I might be driving 3 miles behind a gated Forest Service road and having to cut trees out of the road to reach a stand of 150 year old chestnut oaks, while the next day I could be digging around stumps in a fresh cutover trying to locate tagged stumps in order to find the metal pin that marks our plot center location. It’s that change in scenery that keeps my job fresh and fun. Yes, the measurements are the same from plot to plot, but the different areas you see and the people you meet have kept me in this position for a little over 13 years now.

Some of us FIA “ninjas,” as we are called by some other DOF employees, joke that a normal day in the woods for us is something that people working in a big city high rise would pay to be able to do on a weekend. Driving rough, rocky roads, navigating rock outcrops, and crossing streams only to park the truck and then hike through the woods is something we do on a daily basis for work, while others long to do the same thing on a weekend excursion. Plenty of times, I have found myself on ridgetops with amazing views, and I think to myself, “This is a pretty good job, getting paid to do and see these things that most people never get to experience.”

Landowner interaction is a large part of FIA, and each time I knock on a door, it’s always a surprise. With these plots being randomly picked, I’ve talked to landowners that own a ¼ acre parcel of land where our plot falls to landowners who own thousands of acres. In most cases, there is never any issue with obtaining permission to access their property, and a lot of the time our conversations evolve into forest health, pests, how to go about planting trees, etc. Several times in my career, I have been invited to have lunch with landowners, been offered use of their ATV, and shown around properties these landowners are so proud of. Only a few times have I been denied permission to measure a plot, and only once have I had to listen to a landowner’s conspiracy theory on tree data collection. I commonly get told, “Be careful, there are snakes out there.” One snake is easier to work around than a nest of 50 angry yellow jackets!

The FIA program’s scientific data collection provides much more than a snapshot in time. Forest data illuminates trends and issues that inform forest management and policy decisions. Below are a couple of basic data charts showing changes in Virginia’s forest resource over time. You can download Virginia’s latest report for more fascinating FIA facts and figures.