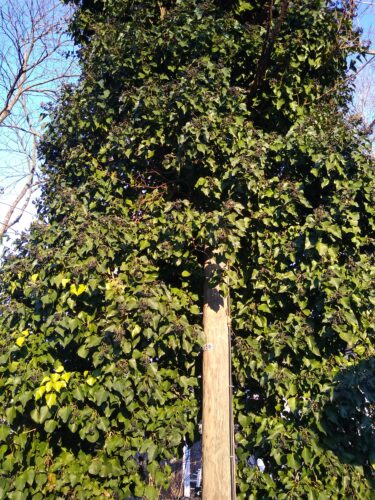 A brand new year brings a brand new feature to Field Notes! Each month, one of our posts will introduce one of Virginia’s “least wanted” – an invasive species that’s easy to spot at that time of year. It might be a plant, an insect, or a disease that’s impacting our state’s natural communities. We hope you’ll keep an eye out for the pest on your own property, treat or remove it when possible, and spread the word about it to your friends and neighbors.

January’s least wanted is probably familiar to everyone. Perhaps, like me, you used it as the base for your Christmas wreath. It’s English ivy (Hedera helix), and it’s easy to see why European colonists brought it here with them. Viewed objectively, ivy is an attractive evergreen groundcover and climbing vine. But it’s harder to be objective when you know the dark side of English ivy.

Ivy in forests reduces plant biodiversity. The plant is highly shade tolerant and can completely cover the forest floor, to the exclusion of native understory plants and tree seedlings. Vines may climb as high as 90 feet, meaning ivy can easily overtop trees, blocking photosynthesis, which eventually starves the tree. Ivy also weighs down branches, making trees susceptible to breakage and windthrow during storms. If all that wasn’t bad enough, ivy is also a host for bacterial leaf scorch, a disease that affects oaks and other native trees.

In yards, ivy creates problems for homeowners. Its sticky aerial roots adhere to surfaces and retain moisture, potentially damaging any structure it climbs. The sprawling vines create thick mats that may harbor rats, mosquitoes, and other unwanted pests.

If allowed to grow unchecked, English ivy will eventually undergo a Jeckyll-to-Hyde transformation. It reaches its adult form around ten years of age, if the vines have achieved sufficient height and sunlight. The leaves change shape, losing their lobes to become more ovate. More importantly, the plant begins to flower and produce fruit.

Ivy produces a lot of berries (technically, they’re drupes, for those of us who like nerd words), which are highly visible this time of year. The fruits are toxic if eaten by humans, and they’re thought to be mildly toxic to birds as well; but, given their availability as a winter food source, birds eat them anyway. The seeds germinate best when the pulp has been removed. Interestingly, one study showed the best germination from seeds that had been regurgitated by birds, but passing through a bird’s gut works, too. Either way, new seeds tend to be dropped wherever birds perch, and soon new vines are making for the canopy.

If English ivy makes your least-wanted list, you can get rid of it with some good old manual labor. Whether you choose to eliminate or simply control ivy, don’t allow it to reach its adult, fruiting form. If the ivy is simply running along the ground, mowing it regularly can keep it under control. Even better, remove vines by pulling them up, which is easier when the ground is moist. Be sure to wear long sleeves and heavy gloves; English ivy is NOT related to poison ivy, but the vines can cause contact dermatitis in some people. Pull climbing vines away from the base of trees or structures and clip every stem. Don’t try to rip vines off the whole tree, as you’ll probably remove a good deal of bark along with the ivy. Just be patient – the entire plant above the cuts will die back, eventually turning brown and losing leaves.

Unfortunately, none of these control tactics is a one-and-done solution. The plant will resprout from the roots, or from nodes of ground-running vines. Complete control can take years in some cases. English ivy’s waxy leaves are resistant to herbicides. If you choose to use a chemical, make sure you get a product recommendation from your local Extension Office or from the USDA Forest Service’s A Management Guide for Invasive Plants in Southern Forests.

Unfortunately, ivy is still sold in nurseries. Given its prevalence in the landscape, you probably won’t have to look far to find an ivy infestation – tree trunks covered in green really stand out in the winter woods. Ivy is often obvious in neighborhood common areas – the wooded strips between home sites. How about a new year’s resolution to remove ivy from your property? If you spread the word about ivy’s downsides, maybe your homeowners’ association will follow suit.