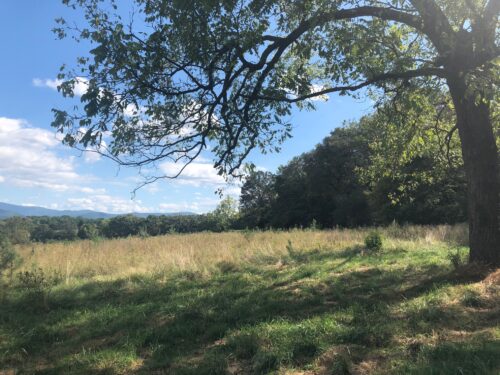 On the afternoon of October 7, a crowd of more than 70 people gathered in Rockingham County for the dedication of Virginia’s newest state forest, First Mountain. First Mountain is the 25th state forest in Virginia and contributes more than 570 beautiful acres of forestland, open fields, and stream frontage to the state lands system.

Gary Heiser, State Forests Manager, selected an idyllic location on the property as a ceremony site. Near the heart of the property, the ceremony took place amid the fields of pine tree saplings, looking out to expansive views of the Blue Ridge Mountains. 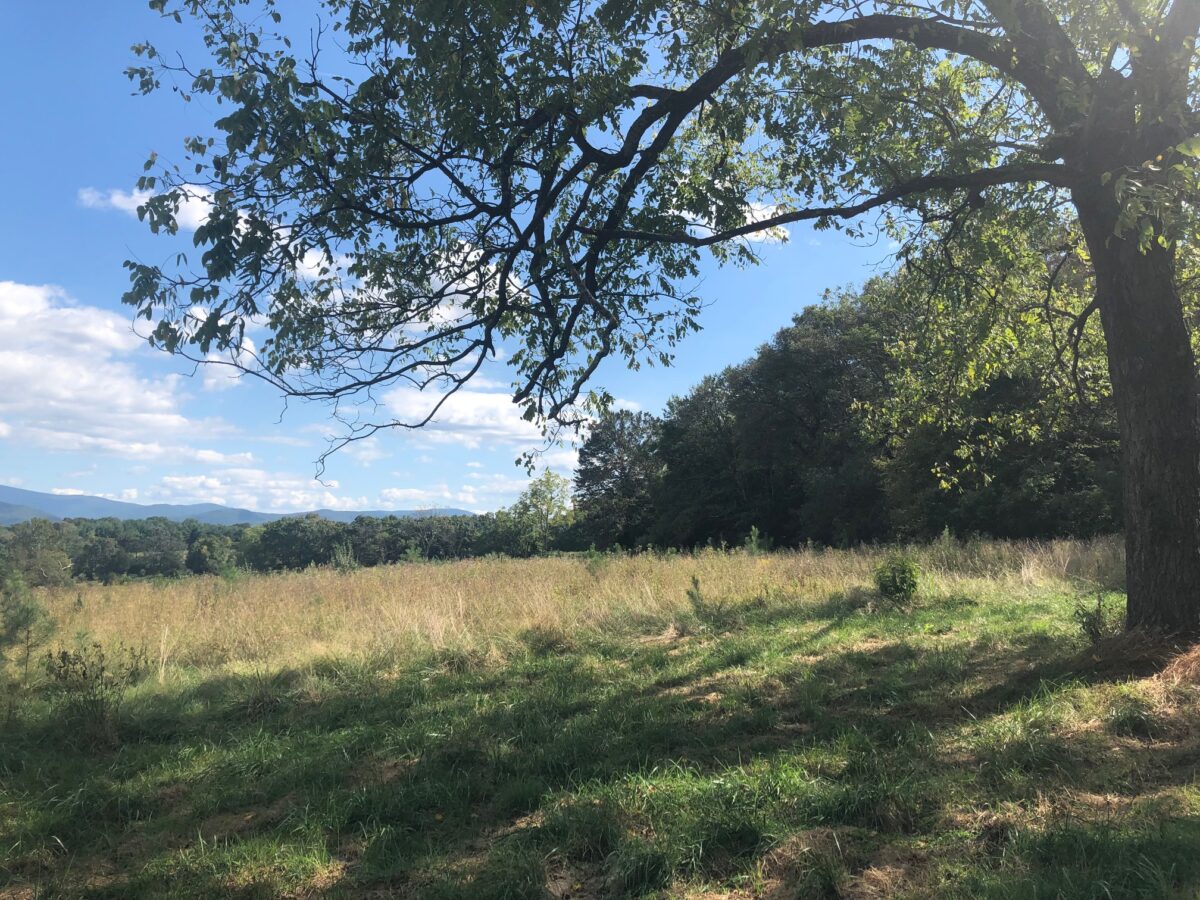 Speakers during the ceremony were state forester Rob Farrell, secretary of agriculture and forestry Bettina Ring, delegate Tony Wilt, and Governor Ralph Northam. Todd Dofflemyer, grandson of Alfred and Virginia Dofflemyer, spoke as a representative of the family from whom the property was purchased.

Originally part of Boone’s Run Farm, the property had been in the Dofflemyer family for multiple generations spanning more than 100 years. Alfred and Virginia Dofflemyer of Albemarle County were the most recent owners of the property and managed the property as a working tree farm until 2007.

During the ceremony, Todd Dofflemyer recalled memories of his grandparents and time spent on “the farm,” as the family simply called it. Todd shared a funny story about his grandfather Alfred’s attempt to begin specifically farming Christmas trees, only to have his efforts thwarted by his brother who mistakenly mowed down all of the newly planted trees in a bid to be helpful around the farm. 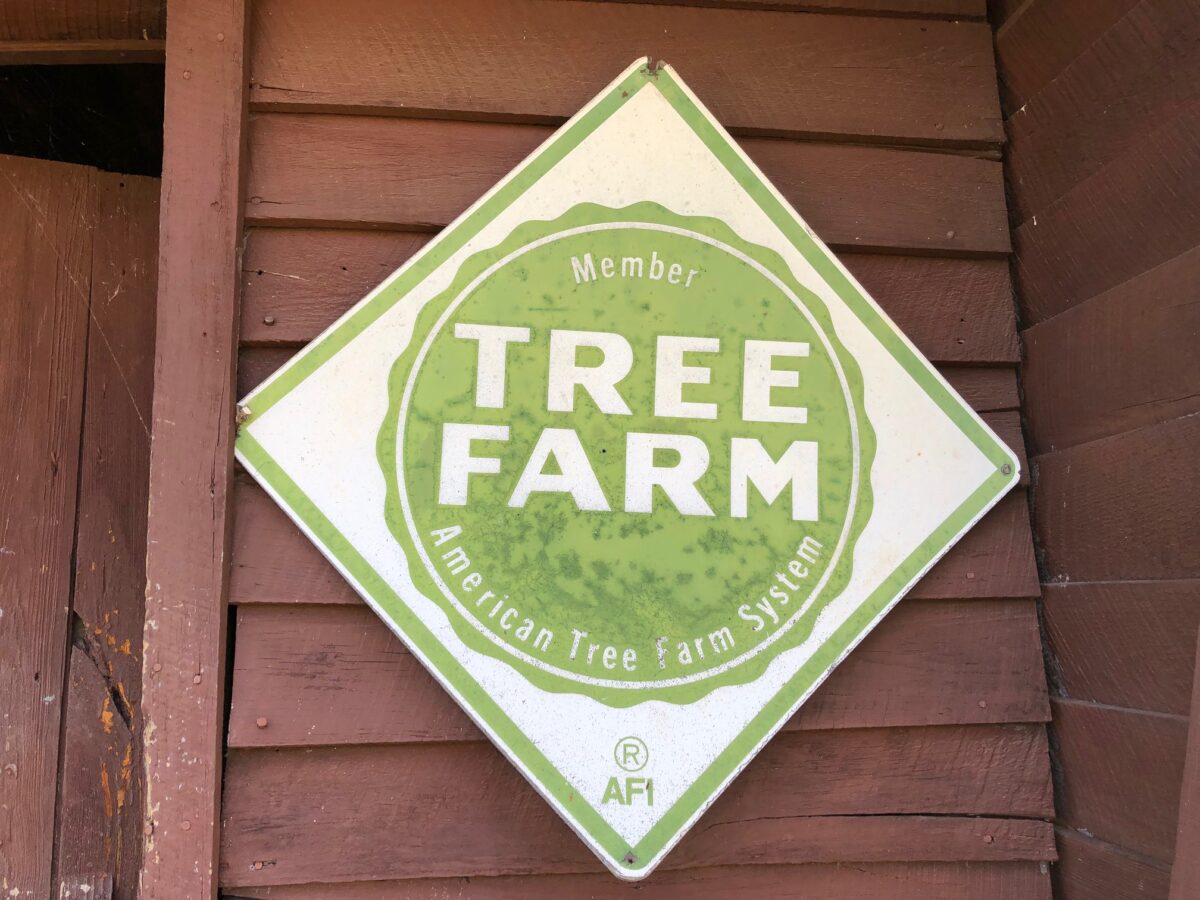 Todd became emotional during the ceremony and indicated how pleased his grandparents would be to know that the land would be conserved and well-used in perpetuity.

After the ceremony, Alfred and Virginia’s daughter Martha Dofflemyer Baugh Clarke and niece Naomi Meadows discussed the family legacy of the land; in their memory, stewardship of the land extended as far back as their Uncle Dewey, who owned the land for decades before Alfred purchased the property from his brother. It’s possible the land was in the family even longer.

Martha said that the transfer of the property to the Department of Forestry’s care was important to her because it fulfills her father’s dream for the property. Naomi reminisced about summers on the farm as a child, when the family cut hay and she was allowed to ride her cousins’ horses around the property. She, too, is pleased that Boone’s Run is now First Mountain State Forest, because, “there is just too much cement asphalt in this world … and this is too beautiful to have that happen to it.”

First Mountain as a State Forest

First Mountain lies on the southeast slopes of First Mountain (for which it was named) in the southern portion of the Massanutten range, and encompasses 573 acres of hardwood and pine stands, as well as open fields and more than 21,700 feet of stream frontage.

The property is also adjacent to 583 contiguous acres of the George Washington National Forest, meaning that the conservation of this land contributes to the overall conservation of large-scale, contiguous forest habitat in Virginia.

As a state forest, First Mountain will be protected from future development and will be open to multiple uses for Virginia residents and visitors. The property will continue on, in part, as a tree farm, but will also be open to hiking and mountain biking, and will be selectively opened to timber harvest and hunting in the future.

In addition to dedicating the newest state forest, the event served as a celebration of the 100th anniversary of the state forest system in Virginia.

Secretary Ring mused on the importance that forestland has played in her life, from childhood memories with her father through her career as a forester. Secretary Ring was pleased that the dedication of First Mountain State Forest was serving as our opportunity to celebrate the anniversary, because First Mountain has “a great name and a great story.”  “There’s no better way to celebrate the 100th anniversary than the dedication of a new one.”

During his remarks, Governor Northam called on the well-known children’s book, The Lorax by Dr. Seuss, to serve as an example for mindful stewardship of our forestland. Following the ceremony, Governor Northam further explained how the State Forest system contributes to his vision for conservation in Virginia.

In addition to protecting forestland, state forests like First Mountain play an important role in improving water quality from the mountains to the Chesapeake Bay. State Forester Rob Farrell previously said of First Mountain, “Water is what makes this place special. With more than 21,000 feet of stream frontage and 43,422 feet of vegetated buffers, First Mountain plays an important role in improving water quality, recreation and tourism opportunities and ultimately the health of the Chesapeake Bay.” 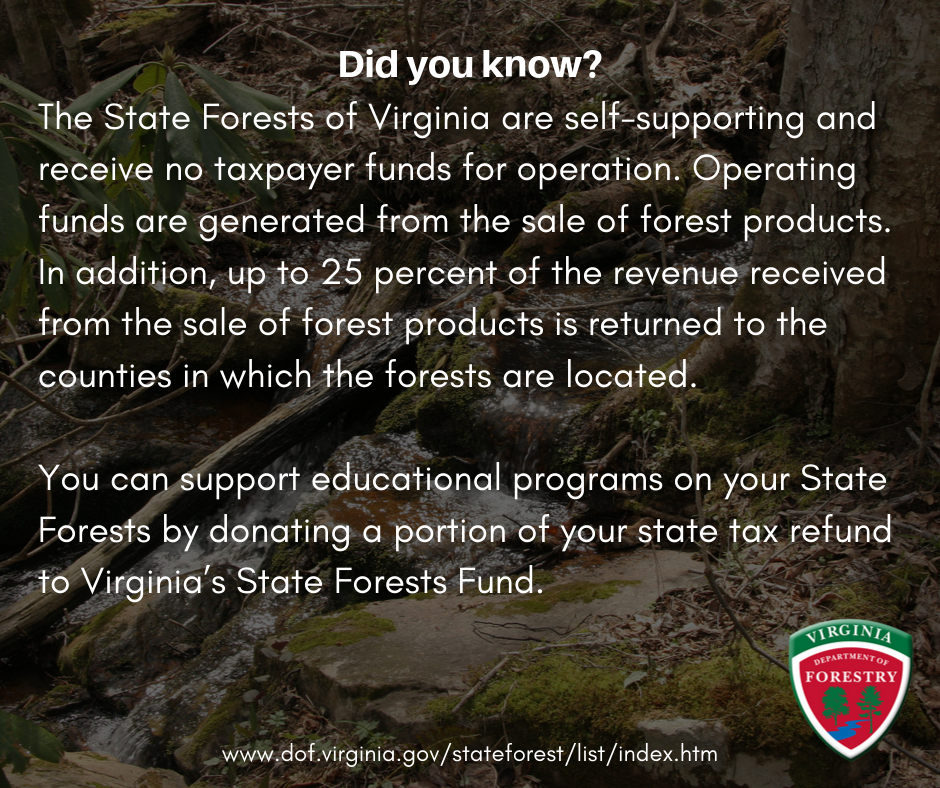