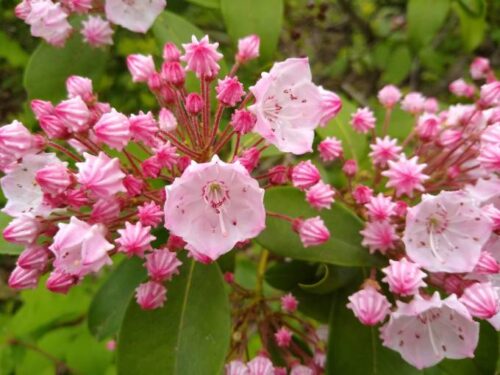 As a botany enthusiast, I spend a lot of spring hikes looking down, seeking out flashes of white and pops of color from early spring wildflowers. Fortunately, when I get tired of staring at the forest floor, there are blooms to be seen at eye level and above, thanks to our spring-blooming native trees and shrubs.

I should first note that all of our broad-leaved trees and shrubs produce flowers, as any allergy sufferer knows all too well. Many plants’ blooms go unnoticed, being quite small or not very “flowerlike” to the human eye. For example, those crispy caterpillar-like strands you sweep off your deck this time of year are catkins, containing the male flowers of oak trees. Plants with these nondescript, unscented flowers often have wind-blown pollen. In contrast, the flowers that catch our attention are usually insect-pollinated. Spring blossoms provide a critical food source for insects that emerge early, and even for hummingbirds on their spring migration north.

One of our earliest-blooming native shrubs is spicebush (Lindera benzoin). This medium-sized shrub can be abundant in the understory of moist woodlands, often along streams and wetland edges. Appearing before the leaves, the flowers resemble tiny yellow pompoms along bare stems. To me, they stand out like fireflies when the woods are still drab gray and brown. 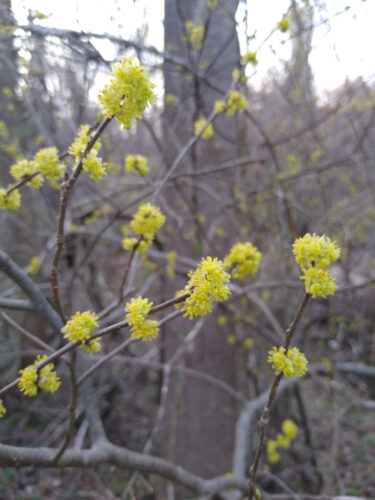 The serviceberries (Amelanchier species) are among our first-blooming small trees. Their flowers look like dainty white stars caught in the leafless branches. In some areas, this tree is known as shadbush, so-named because it blooms when the shad begin their migration runs up Virginia rivers.

Eastern redbud (Cercis canadensis) is another small tree that blooms before the leaves appear. If you notice clouds of purple hazing the highway edges in early April, that’s redbud. As a nice bonus, the tiny flowers are edible. Toss them in a salad for pretty color and extra vitamin C; they taste sort of like peas, but with a slight sour tang. 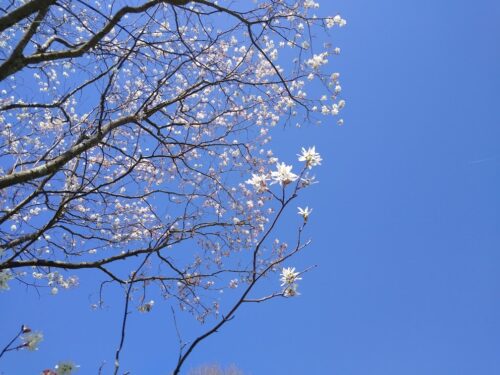 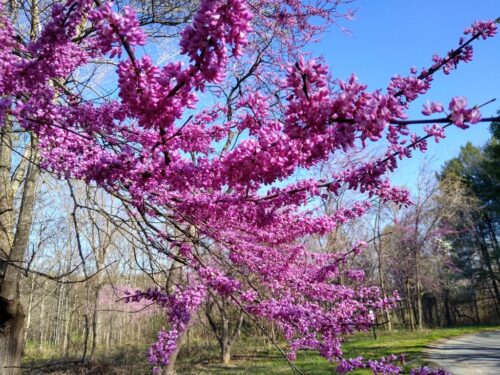 Everyone is familiar with Virginia’s state flower (and tree), flowering dogwood (Cornus florida). But did you know that the four iconic white “petals” are not actually the flowers? Instead they are bracts, petal-like leaves that surround a cluster of small yellow flowers. So our state flower is really more of a state “cluster of tiny flowers surrounded by very showy bracts.” Cheer up, Virginia – North Carolina was fooled too!

About the time dogwood’s display lights up the woods, you may notice another small understory tree (or is it a shrub?) holding big lacy clusters of tiny white flowers above newly unfurled leaves. It’s blackhaw (Viburnum prunifolium), one of the larger and showier of the Virginia’s viburnums. 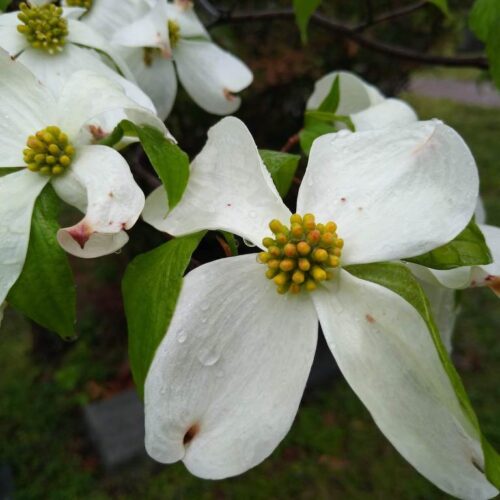 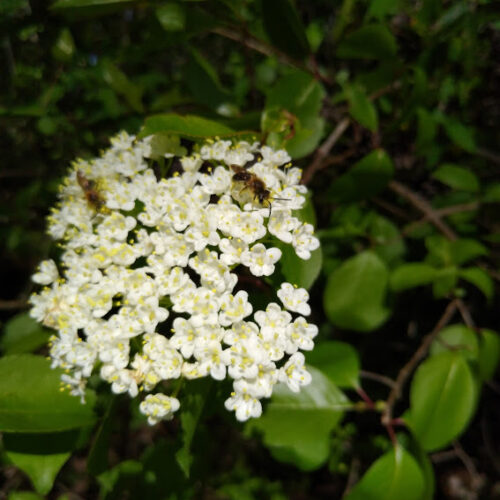 The blooms of yellow-poplar (Liriodendron tulipifera) are striking, but you may never have seen them. That’s because yellow-poplar grows fast and tall, so the flowers tend to be high in the canopy. I often find fallen ones along trails in early May. They loosely resemble tulips, giving rise to one of the tree’s common names, tuliptree. Those big, showy flowers are also a good clue that this tree is in the magnolia family, not a poplar at all. 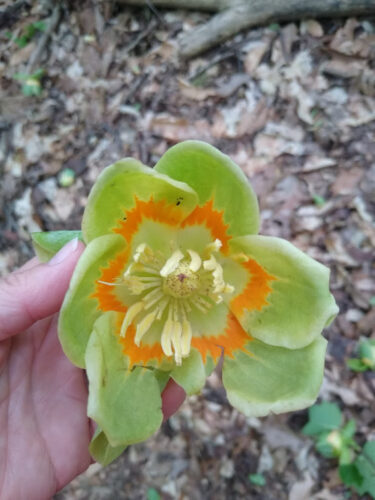 There are several species of wild azalea in Virginia, but the most common and widespread is pink azalea or pinxterflower (Rhododendron periclymenoides). Unlike the heavy-flowering imported azaleas so popular in the nursery trade, wild azalea is deciduous, with sparser flower clusters that stand out nevertheless. Pink azalea is one of the later shrubs to leaf out, with flowers appearing just before or with the leaves. The very long, curved pistil and stamens (female and male flower parts, respectively) give each flower a delicate, spidery look. If you’re lucky, you might see a hummingbird probing the tubular flowers. 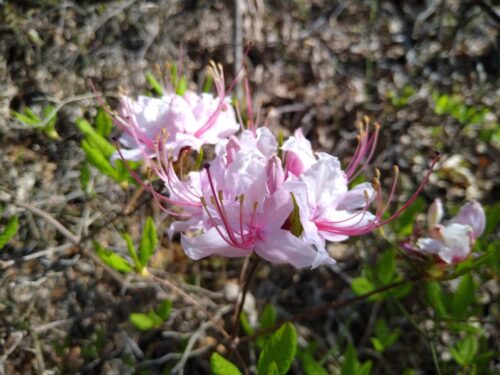 I can’t end this post without highlighting my favorite spring-blooming shrub – mountain laurel (Kalmia latifolia). Pennsylvania and Connecticut had the right idea – THAT would make a great state flower! Despite having mountain in its name, this evergreen shrub is found all over the state. The masses of flowers vary from white to pink. Each one is a work of art, a case of form following function. The petals are fused into a cuplike structure that make a nice, secure landing place for a bee. The ten arched stamens have their anthers tucked into pockets, marked by dark pink dots inside the flower. When a bee jostles a stamen, the anther pops out of its pocket, spattering the bee with a puff of pollen. Ingenious! Mountain laurel is typically in bloom around Mother’s Day. That’s a great reason to take your mom, yourself, or really anyone you know, out on a hike this month. 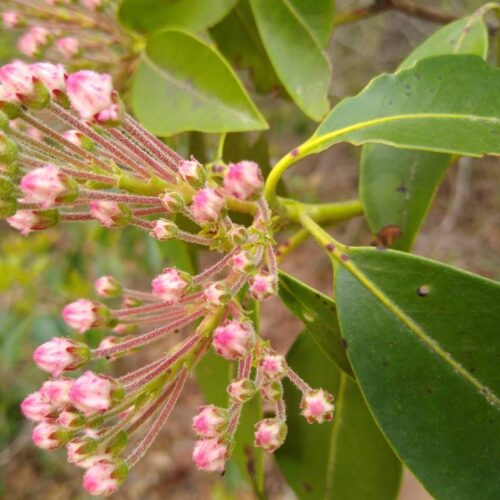 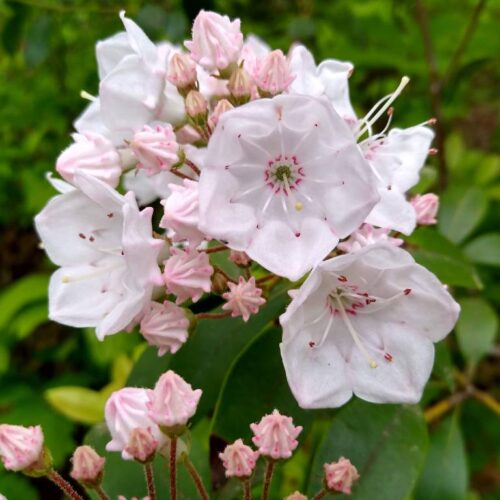 Mountain laurel in bud, then beginning to bloom