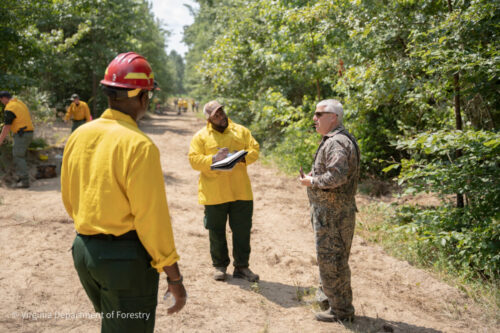 New Kent County, east of Richmond, experienced a rash of suspicious fires the week of July 18. Fortunately, the fires were intentionally set as part of an FI-210 Wildland Fire Origin and Cause Determination class, and were necessary to train the next cadre of wildland fire investigators in Virginia and the Southeastern part of the United States. 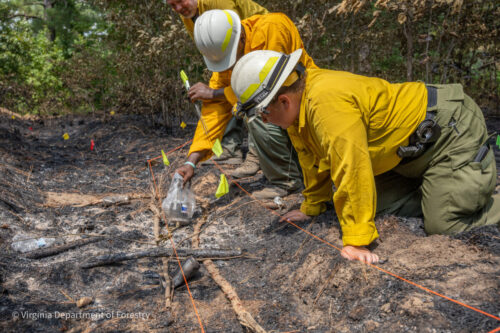 The 12-person training team included two VDOF employees and 10 USFS employees, with 6 VDOF and 23 USFS student investigators. USFS trainers and students came from across the country, from California to Texas and several Mid-Atlantic states.

Early in the week, the new investigators (the majority within 5 years of joining their respective service) spent time in the classroom learning about fire ignition sources, fire origin determination, and the indicators that will help them identify where a fire began. Building on the classroom session, the activities then moved to the field.

Temperatures hovered in the mid-’90s with high humidity as the novice investigators crawled on the scorched forest floor learning to identify and follow directional indicators to the fire’s ignition origin. This is a vital part of a fire investigation. To determine a responsible party, the first step of every investigation is to figure out where a fire began and how it may have started. These skill-building sessions led up to the final outdoor exercise, the suspicious fire scenario. 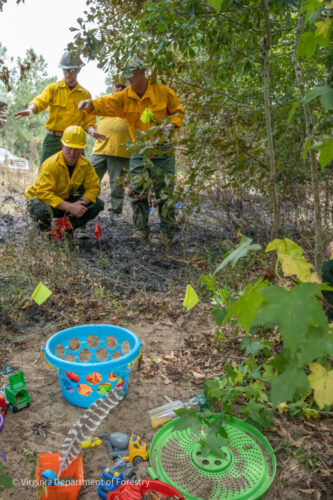 Eastern Region Fire Specialist Heather Tuck put out the call to the Eastern Region of the Department of Forestry for “actors” to help with this interactive experience. I figured it might be fun to be the investigated rather than the investigator for once, so I volunteered to be one of the actors. The weather was beautiful (just a little hot) on the day of the field exercise. The forecast for the Tidewater area was for the hottest day of the year and an Excessive Heat Warning, ideal for dressing in my turkey-hunting clothes and pretending it was April! The prediction did not disappoint. The VDOF volunteer actors were questioned about their stories involving their fire by the students and some were eventually arrested. Yes, we were all guilty of starting a fire, intentionally or not.

The scenarios were realistic, frankly things that any VDOF fire investigator can tell you they have seen in their careers. They ranged from squabbles between neighbors to children playing with matches, an escaped debris burn, campfire escapes, and even a disgruntled hunter setting the woods on fire (that was me). It was interesting to me how defensive I became as an actor. I will have to remember that when I question my next person about a fire cause.

Each of the cases was developed by the investigation teams and presented on the last day of the training. We (the actors) were not in attendance, I suspect that may be a good thing since I may not have been as cooperative as I could have been!

As my scenario came to an end, I took the opportunity to speak with the incident commanders of this class. Jerry Hepler was the lead instructor of the class, criminal investigator, and chairperson of the National Wildfire Coordination Group Wildland Fire Investigation Subcommittee. I asked how and why a California crew of investigators made their way to a site on the East Coast of the United States. He told me that VDOF Central Region Water Quality Specialist Derek Kiser had assisted in teaching the next level of investigation class, FI-310 Wildland Fire Investigation: Case Development, with him in Reno, NV. One of the benefits of interagency contacts like this is that they can lead to more diverse training opportunities.

Region 8 of the USFS, the Southern Region operating out of Atlanta, was searching for a class site for their newer employees and to provide some refresher work for others. Derek suggested VDOF’s New Kent Conference Center. New Kent is an excellent site for training like this with an up-to-date conference center to serve as a classroom and acres of property with varied ground covers, from mixed pine and hardwood timber to grass-dominated sites, and the now-retired seed orchard to bottomland hardwoods. 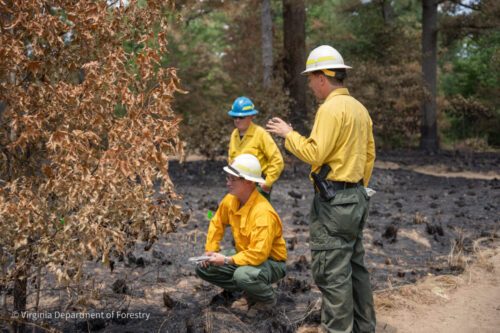 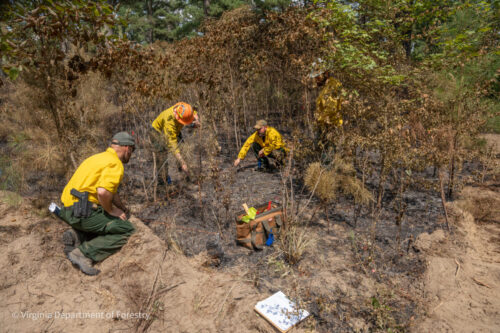 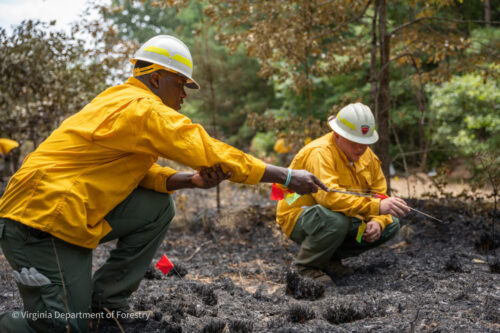 Speaking with Matt Swanson, lead instructor for the field exercises, he expressed how great the site is for training fire investigators. He told me that as an experienced investigator in California, coming to the East Coast has given him the opportunity to see and experience different fire behavior and fire indicators. He went on to explain how, by training in just one type of habitat, you will only see a few types of fire behavior. Being in different habitats broadens your perspectives. Both he and Jerry stressed that the USFS investigative teams are a national resource. They can be called to investigate a blaze in any state at any time. The more perspective you have, the better prepared you are for all scenarios.

Both men were extremely appreciative of the hospitality that VDOF and the New Kent Conference Center staff provided. There is a great deal that goes into holding a training that involves safely conducting live fire; fire lines must be installed, transportation to and from the training grounds must be arranged, and just general logistics of an event like this are daunting. I hope that we left a good impression on our out-of-state colleagues and they will consider Virginia for future trainings.

I certainly enjoyed my interactions with the training staff, the students and my fellow actors.  I’m sure the folks from California have seen better actors, but I guess that is why we are foresters!