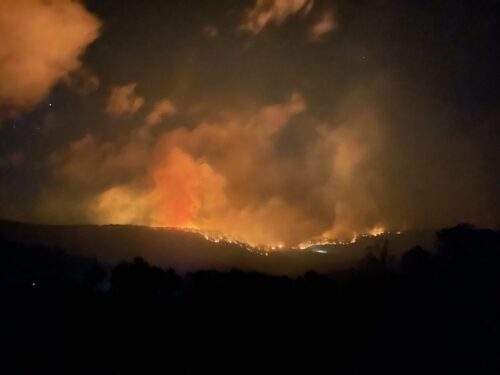 April 30 is the last day of Virginia’s spring fire season, and it typically goes out like a lamb. Not this year.

VDOF personnel were on high alert all day last Friday, after the National Weather Service issued a Red Flag Warning, meaning low humidity and high winds would create conditions ripe for wildfires. In fact, on Friday and Saturday, VDOF personnel responded to eighteen fires which burned more than 1800 acres.

Teamwork among state, federal, and local agencies is critical to managing wildfire, especially when fires get large, when weather conditions are dangerous, or when multiple fires occur. Such teamwork came into play Friday in Rockbridge County. That afternoon, VDOF’s Mountain Valley team was working an eight-acre fire two miles north of Covington, started by a downed power line, when a large smoke column was spotted near Goshen. Fortunately, VDOF has an agreement with the U.S. Forest Service (USFS), allowing the agencies to assist each other when fires occur near the borders of National Forests.

Butch Shaw with the USFS was the first one on scene at the Goshen fire, with a bulldozer. Shaw’s crew was able to start working to protect homes while VDOF diverted some personnel from the Covington fire. It was quickly determined that the new fire was on the Department of Wildlife Resources’ (DWR) Goshen Wildlife Management Area, in very steep terrain, with an initial estimate of 300 acres. Gusty winds exceeding forty miles per hour and relative humidity in the teens made initial control impossible. Eyewitnesses noted forty to fifty-foot flames running upslope in the high winds.

A landowner snapped this photo showing the fire cresting a ridge. The lights of the USFS bulldozer can be seen plowing a fire line on the near side of the ridge.

By Saturday morning, the fire had increased to 700 acres, and resources assigned to the fire included VDOF (an Incident Management Team, two hand crews, two JD 450 dozer units, two engines, and a drone); DWR (personnel and one engine); USFS (personnel and one dozer unit); and numerous Rockbridge County Fire and Rescue personnel who worked to protect structures. By Sunday morning, the fire had grown to 1350 acres, with 40 personnel from multiple agencies.

Eventually, the weather cooperated: rain on Sunday evening and Monday helped firefighters contain the fire at 1730 acres. (The cause of the fire is still under investigation.) Given the weather, terrain, and remote location, this fire could have been much larger. Thanks to a cooperative effort, lives and homes were protected.

It’s May now, and the official fire season in Virginia is over. However, fires are always possible, and VDOF urges everyone to be vigilant. May is Wildfire Awareness Month; stay tuned to this site for information to help keep our communities safe from wildfire.