Holiday DIY from the Yard 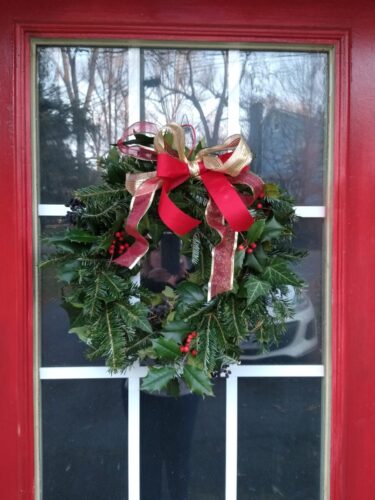 Want to save some money during the spending season? With a little creativity, you can get a lot of holiday décor from your own yard.

Decorating with what I have on hand gives me a sense of efficiency, as well as a connection with my paternal grandmother. Growing up in the rural South, she often foraged for wild foods like “creasy greens” (winter cress) and brewed mullein tea to treat colds. Shooting down mistletoe, clipping holly sprigs, and decorating a cedar tree cut from family land were some of her holiday traditions. (Her father was also known to catch an occasional possum, feed it corn to “clean it out,” and eventually serve it as a special treat for dinner. Pass.) 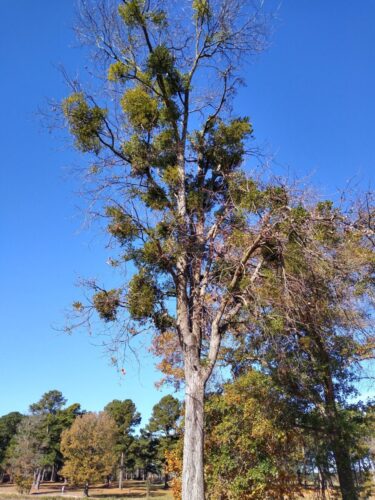 Foraging for plants to eat requires some expertise, but collecting them for artistic use requires only some imagination. Almost anything will work, with safety precautions. For example, holly and mistletoe berries are somewhat toxic, so if you have pets or small children, keep these decorations outside or well out of reach.

Holly foliage is, of course, traditional for Christmas. In addition to our native American holly, many yards have English or Chinese holly as ornamentals. In addition, foundation plantings may include species not easily recognizable as hollies; these include Japanese holly, inkberry, and dwarf yaupon. All of these can add to a festive wreath or centerpiece. They make a good substitute for boxwood, without that plant’s characteristic cat urine odor. Winterberry is a holly whose stems are bare but covered in bright red fruits this time of year. A few sprigs tucked into a wreath can fill in bare spots with festive color. Note that some of the holly shrub varieties have black fruits, and male hollies of all species bear no fruit at all. 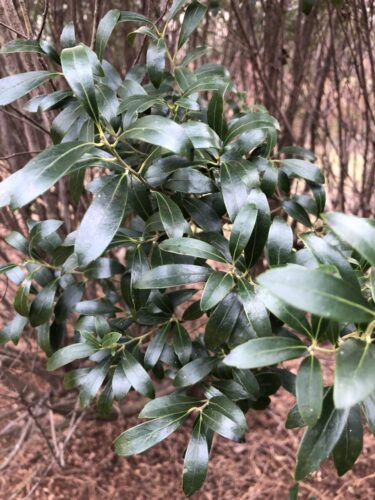 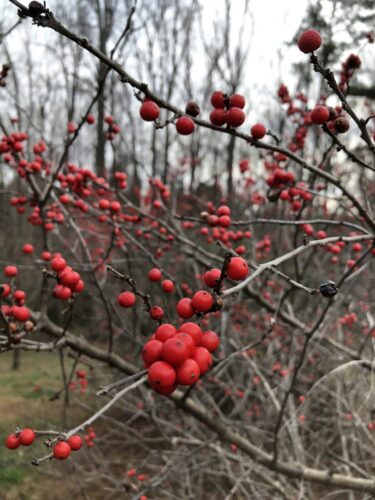 Pines of all kinds – and their cones – can be used in holiday decorations. Their fresh resiny scent is a bonus. Once, I used a small, scraggly Virginia pine as a Christmas tree. I don’t recommend it, as that species has a distinctly Charlie Brown vibe. But to this day, I use some gold-painted Virginia pine cones as tree ornaments; they’ve lasted for years.

White pine is the gold standard for multipurpose holiday use, grown for Christmas trees as well as garland. Watch 7:37-8:09 in this video from Virginia Cooperative Extension to see how white pine roping is made for sale. Doing it by hand is a little slower, but not difficult. 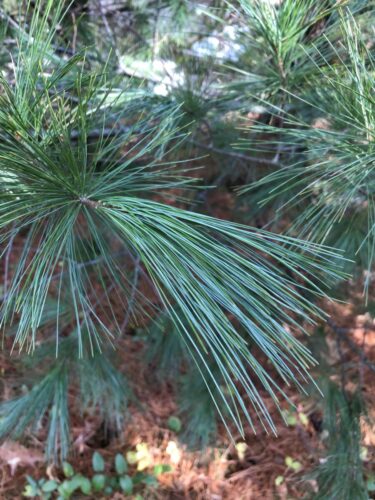 Eastern white pine has softer needles and a more bluish tone than other native species.

Many ornamental evergreens, such as Leyland cypress, arborvitae, and Norway spruce, can also be clipped for greenery. Our native eastern redcedar holds up well in wreaths and sprays. As with holly, only the female plants produce the frosted blue berries. As mentioned earlier, redcedar has long been used as a “freebie” Christmas tree, as it often grows like a weed in old fields and along fence lines. From personal experience, I advise against placing a redcedar over tightly woven carpet. The tiny needles are quite prickly and will embed themselves halfway into the fibers, becoming almost impossible to remove. My cousins and I learned never to walk barefoot in the Christmas tree corner of my grandparents’ living room, no matter what the time of year. 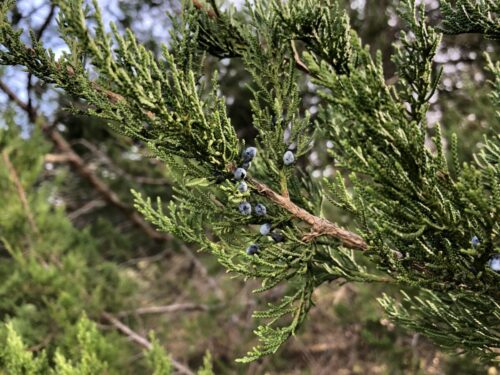 Many vines are invasive, so cutting them brings a special kind of joy. Porcelainberry and Asian bittersweet vines make good wreath forms, into which you can tuck all kinds of greenery. (It’s tempting to keep the split pods and berries of bittersweet, but don’t let them fall where they might sprout.) Evergreen vines like English ivy or Japanese honeysuckle wreaths come complete with their own base of greenery. 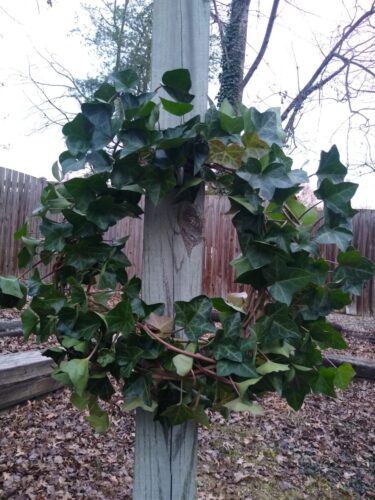 Don’t forget grasses for a natural look to your holiday décor. Small bunches of long, flexible grasses, such as broomsedge, switchgrass, or little bluestem, can be gathered into swags, stuck into wreaths, or even tied into bows. If you aren’t sure of the identity of grasses, make sure to remove the seed heads so as not to spread potential invasive species.

If you buy a real Christmas tree, you probably cut off a few lower branches before plopping the tree in its stand. Don’t throw those out! Just cut them into smaller pieces and use them in combination with other greenery. You can also put a “bouquet” of them in a vase to make a mini-tree centerpiece. (To learn more about Christmas trees and farms in Virginia, and to locate a farm near you, visit the Virginia Christmas Tree Growers Association.)

I hope you’ve been inspired by a creative – or money-saving – urge to make your own decorations this year. If so, grab some clippers and head outside with the whole family. And, for more family nature fun this season, check out VDOF’s Nature Near You winter activity sheet.