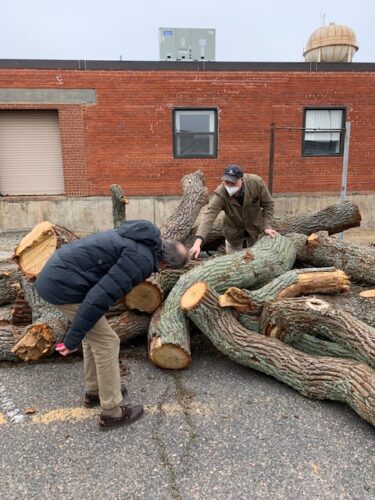 With so many waterways, boats played an important role in Native American culture in Hampton Roads, and when the English colonists arrived in Jamestown in 1607, the scope of this industry began to expand. While the nearby Chesapeake Bay provided easy access to the ocean, the forests provided the resources to build ships. Tall and filled with resin, the longleaf pine provided wood for the ship masts and rosin for naval stores of tar, pitch, and turpentine. Elegant live oaks found along the coast were utilized for “compass” wood, which is used for the structural ribbing of ships. Other species found in southeastern Virginia, such as Atlantic white-cedar and white oak, were also used for shipbuilding. Today, most of our ships are not built with wood from these trees, or even from wood at all. But, for some historical ships, this wood is still vitally important to their upkeep. Some Department of Forestry staff came to understand this need while helping the Fort Monroe Authority (FMA) find uses for the wood from trees they had to remove from the fort’s property.

Fort Monroe and the smaller forts that came before it have been witness to many important events in Virginia and United States history. Inside the fort, you will find many beautiful live oaks, including the Algernourne Oak, a live oak estimated to be about 500 years old. While the Algernourne Oak is still standing witness to daily life inside the now deactivated fort, several other live oaks had reached the end of their lives and had to be removed. The FMA hoped that some of the wood from these trees could be used in a way that reflected the fort’s historical significance. 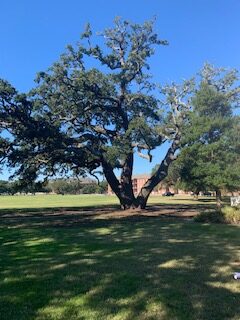 Trying to find a fitting use for the wood from such a historical site, we reached out to the Jamestown-Yorktown Foundation (JYF), to see if the wood could be of use for the Jamestown Settlement ships: replicas of the Susan Constant, Godspeed, and Discovery. The ships, which can be seen at the Jamestown Settlement, are recreations of those that sailed from London to Virginia in 1607 with English colonists on board. The General Assembly has designated these ships as “the official fleet of the Commonwealth.”

The JYF was excited to learn about this new source of wood for their ships. We were able to facilitate a meeting between the two groups to discuss this exciting opportunity for wood utilization that could connect two historically important places in Hampton Roads. During the meeting, we learned that the JYF Maritime Program regularly uses urban wood and reclaimed longleaf pine timber for the ships’ maintenance. After combing through the logs that FMA had assembled, the shipwrights from JYF were able to find several pieces to use for ship maintenance and repair. As you will notice in the following picture, JYF was not interested in straight logs; they were looking for the crotches, or limb and trunk connections, and other curved pieces to be used as compass wood. For any future live oak removals, FMA plans to contact JYF so they can be involved in the removal process, allowing them to specify the structural cuts of wood that can best be used in the maintenance of the Fleet of the Commonwealth. 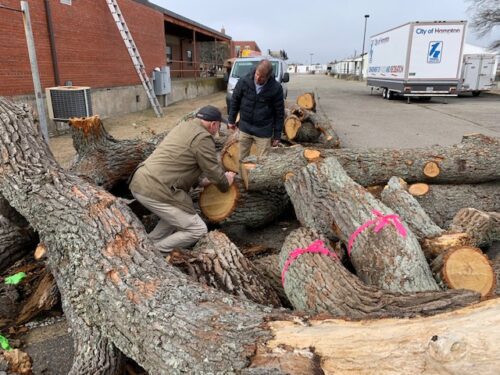 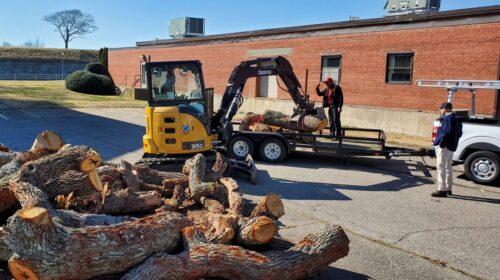 We were also excited to learn that JYF has contact with other historical ships that may be able to use wood that they could not. Through their connections, wood from Fort Monroe might one day make it onto other historical ships, such as the USS Constitution – one of the United States’ first six original warships.