On the Wings of a Tiny Wasp 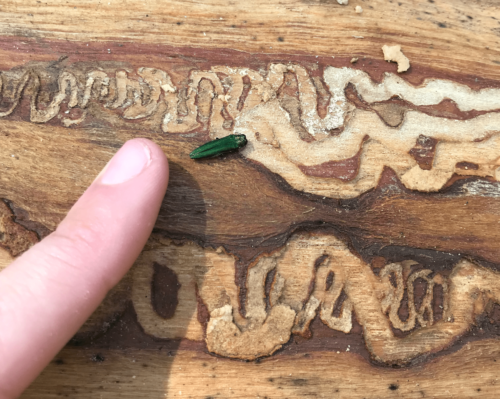 The fate of Virginia’s stately ash trees might rest on the wings of a tiny wasp.

For more than a decade, ash trees (Fraxinus genus) have been under threat from an invasive insect pest, the emerald ash borer (Agrilus planipennis) – EAB, for short. The larvae of this beetle feed on the phloem of ash trees, disrupting nutrient transfer. Native ash trees didn’t evolve with EAB, and its natural enemies aren’t here to control it. As a result, EAB has steadily decimated ash trees across much of the state, and an estimated 99% of our ash trees will die without some intervention.

Efforts to protect individual valuable ash trees often involve treating them with systemic insecticides. But a landscape-scale approach is needed to protect forest trees. Enter the wasps – specifically, the tiny parasitic wasps that keep EAB in check in its native range – also known as “parasitoids”. There’s no need to worry about stings from these wasps. They use their ovipositors to lay eggs in or on EAB eggs or larvae – not to sting. Plus, they’re tiny. In fact, you might mistake them for gnats!

Three species of parasitoids have been intensively researched by USDA and approved for release in Virginia. They attack only EAB, so the hope is that they will establish populations here and keep the EAB population in check, allowing ash seedlings to survive and the ash population to regenerate in the future.

Release of parasitoids is a form of biological control, also known as “biocontrol.” In Cumberland and Whitney State Forests, VDOF has released thousands of wasps: Oobius agrili, Spathius agrili and Tetrastichus planipennisi. So far, a survey of felled and debarked trees from Cumberland State Forest has revealed that some Spathius wasps have parasitized EAB larvae. (Incidentally, nearly a third of the EAB larval tunnels studied had been terminated by woodpecker feeding – an unintentional form of biocontrol!)

In addition to efforts in Cumberland State Forest, VDOF worked with land managers in Grayson Highlands State Park and James Madison’s Montpelier to release parasitoids (Oobius agrili and Tetrastichus planipennisi). The parasitoid biocontrol efforts support VDOF’s “100-themed” goal of protecting 100 ash trees across the state – part of the National Association of State Foresters’ Centennial Challenge. Although the 100 trees in the Challenge are being directly protected by insecticides, biocontrol has the potential to protect many more generations of ash trees.

It will take time to verify how well the wasps are controlling EAB populations. At Cumberland State Forest, they have made a start, and VDOF will assist land managers at Grayson Highlands State Park and Montpelier to monitor the impact on their properties.

Note: The parasitoids were produced and supplied by the USDA EAB Parasitoid Rearing Facility in Brighton, MI.