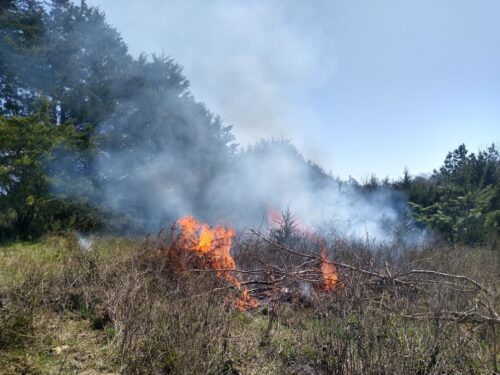 Pleasant Grove Park in Fluvanna County offers a nature-rich experience for visitors and a variety of habitats for wildlife. Behind the scenes, it’s also a model for collaboration between county government and a plethora of partners.

VDOF has been a part of several education and stewardship projects at the park, including establishment of a tree identification trail, providing trees for planting, and most recently, maintenance burning of fields to improve habitat.

On an April morning, members of VDOF’s Jefferson work team performed a prescribed burn of some grass fields at the park. The park plans to maintain these fields as early successional wildlife habitat, potentially establishing warm season grasses in the future. Forester Chuck Wright made all the preliminary arrangements for the burn, including meeting with the county Board of Supervisors to get approval to burn in the park. Although it was fire season, VDOF obtained a spring 4PM Burning Law exemption, which can be used for wildlife habitat maintenance and improvement if conditions allow.

As with any prescribed fire, safety came first. The fields were near Fluvanna High School and a main road, so many factors had to align for a safe and successful burn. Weather forecasts were checked in the days leading up to the burn. Fire lines that had been plowed around the area weeks earlier were refreshed with the bulldozer. The morning of the burn, the county closed most of the park, and VDOT put up a road sign warning motorists of a burn in progress. Burn boss David Powell checked the temperature, humidity, wind speed and direction before sending his team out with drip torches to light the first field. He continued to monitor the weather periodically, and an afternoon drop in humidity meant ending early, even though part of one field didn’t get burned.

In contrast to the early successional fields, some areas of the park are being converted to forest. Walter Hussey is one of Pleasant Grove’s most active volunteers, and he has been involved with tree planting in many areas of the park. On a recent drizzly day, he and seven other members of the Rivanna chapter of Virginia Master Naturalists planted American chestnuts near the community gardens at Pleasant Grove. Jerre Creighton, research forester with VDOF, provided seedlings and nuts – a mix of pure American chestnut and hybrids that are 15/16 American. The hybrid trees are the result of years of backcross breeding with Chinese chestnut. Researchers hope the trees’ Chinese heritage brings along genes for long-term resistance to chestnut blight.

Master Naturalists are just one of the groups who collaborate with the county on stewardship and education at Pleasant Grove. There are also local Master Gardeners and Tree Stewards working to improve the park environment. And, as one volunteer at the planting put it, “Some of us wear more than one hat.”

County school students are also stewards of Pleasant Grove. In fact, the chestnuts joined a field of other wildlife-friendly hardwoods, including white oak, red mulberry, dogwood, black cherry, and American plum, that were planted on Earth Day two years ago by county first and second graders.

It’s not often you find a local park with over twenty miles of hiking trails, river access, a dog park, pollinator garden, a historic home and museum, and more. Pleasant Grove Park is already a fabulous spot to visit, and thanks to the work of many partners, it just keeps getting better.