Field Notes: Restoration Planting at the Mariners’ Museum and Park 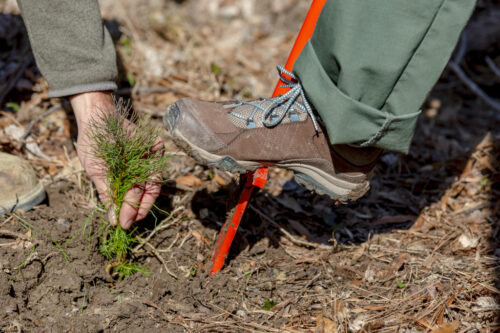 Photography by Amanda Shields, The Mariners’ Museum and Park

Right in the heart of Newport News, you will soon be able to see a shortleaf pine forest. On a perfectly sunny March day, 700 shortleaf seedlings from the Virginia Department of Forestry’s (VDOF) nursery found a new home at the Mariners’ Museum and Park.

With an historic range covering parts of twenty-two states and 282 million acres, shortleaf pine (Pinus echinata) is one of four pine species that were once prevalent in the Hampton Roads area. The species was found in a variety of forest types including pure stands, loblolly-shortleaf, and shortleaf pine-oak. However, thanks to fire suppression, land use changes, and a preference for the faster growing loblolly pine, shortleaf is now found in just a fraction of its original range. It is now considered a diminished species throughout much of the Southeast.

The planting project was the result of a partnership developed between VDOF and the Mariners’ Museum and Park that began last year. The park approached VDOF to create an updated management plan for their approximately 300 acres of forested land—a beloved escape from the urban setting of Newport News. While completing the plan, I noted that the park contained stands of pine, mixed pine and hardwood, and mixed hardwood. Interestingly, all four of the native pines – loblolly, shortleaf, Virginia and some young planted longleaf pines – were present. I also found several areas where invasive species had overtaken the native vegetation, as is common in urban parks. One such area had also been damaged during Hurricane Isabelle in 2003 and had a sparse overstory. My advice was to clear the invasive species and do a restoration planting in these areas.

Given the decline of shortleaf pine in Virginia, the park staff chose it as the species to plant. The sparse overstory made the species a good choice for the site. The park received a Virginia Trees for Clean Water Grant to assist with the planting. To prepare the site beforehand, Dave Kennedy and Graham King from the Mariners’ Museum and Park set to work with volunteers, clearing out the Callery pear, Japanese privet, English ivy, and other invasive species.

On the day of the planting, volunteers from the Peninsula Master Gardeners and Newport News Master Gardeners, led by Dave Kennedy, Graham King, and Erica Deale from the Mariners’ Museum and Park, worked diligently to get the bareroot seedlings into the ground. VDOF staff Scott Bachman, Kendall Topping, Stephen Jasenak and I all came out to assist with the planting as well.

The VDOF Blackwater team looks forward to seeing the seedlings grow and continuing to build this partnership with the Mariners’ Museum and Park.