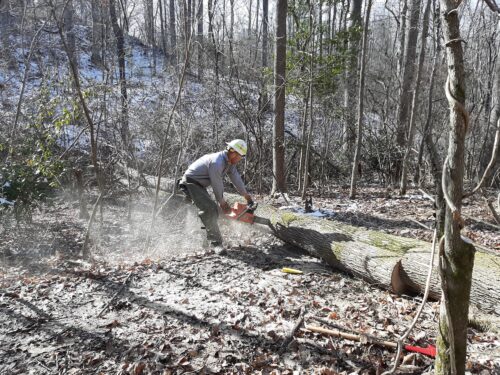 The Virginia Department of Forestry (VDOF) helped Camp Kum-Ba-Yah give some much-needed care to their campground’s forest. The wooded property in Lynchburg, Virginia is owned and operated by the Lynchburg Covenant Fellowship. Camp Kum-Ba-Yah was founded in 1950 by Reverend Bev Cosby. Along with the camp, the property houses the Church of the Covenant, The Lodge of the Fishermen, Common Grounds Café, and Chrysalis Interfaith Retreat Center.

Ash trees on the campground had been impacted by an invasive pest, the emerald ash borer (EAB). The sick trees needed to be removed to restore the health of the camp’s forest canopy. However, the trees will soon be replaced by native tree plantings. Camp Kum-Ba-Yah received funding assistance from VDOF to remove and replace the infested ash trees through the EAB cost-share program.

On January 30, VDOF area forester Bill Perry and crew members from several local tree companies visited the campgrounds. The crews cut down eight ash trees that had been infested with EAB.

Though they’re sad to see their forest of ash diminished, the camp’s operations manager Amy Bonnette said they’re “making lemons into lemonade”; removed ash trees have been milled for use in future projects around the campgrounds.

Camp Kum-Ba-Yah has some historical significance in the Lynchburg area, dating back to the Civil Rights Movement. In 1961, when city pools were closed to the public rather than desegregated, the camp’s founder opened their integrated pools to Black families in the area.

The following year, as Dr. Martin Luther King Jr. made his way to speak at E.C. Glass High School in Lynchburg, he ate at The Lodge of the Fisherman on the campgrounds – one of only two non-segregated dining options in the city. Reverend King would go on to give his well-known “American Dream” speech at E.C. Glass. Listen to Dr. Martin Luther King Jr.’s “American Dream” speech, or read the transcript.

The restaurant in the lodge, now called Common Grounds Café, is still in operation and stands as a small piece of American history. Read more about Dr. Martin Luther King Jr.’s visit to The Lodge of the Fisherman.