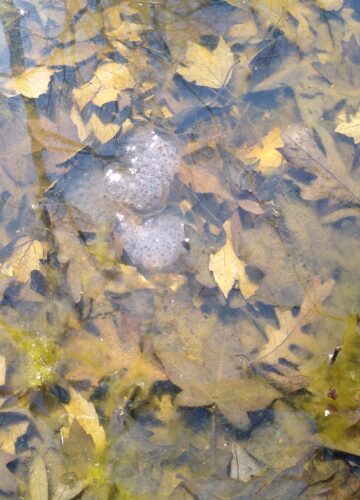 The woods are alive, with the sound of … frog calls? Yes, it must be spring in Virginia!

Beginning in late winter, ponds, swamps, sloughs and vernal pools become concert halls for breeding choruses of frogs and toads, known collectively as anurans (nerd-word of the day). Joining them are the much quieter – but no less numerous – salamanders. These amphibians spend most of the year living in the surrounding woodlands, mostly hidden under vegetation and logs. On rainy nights in early spring, they begin their mass migrations to wet areas for a reproductive frenzy.

Vernal pools are especially important breeding areas for many amphibians. These pools are seasonally flooded wetlands that occur in low spots of forests, floodplains, and meadows, usually filling in late fall or winter and drying up before summer. Their temporary nature ensures that fish can’t live in them, which is good for amphibians, because fish would eat their eggs and larvae.

I recently joined a team of Virginia Master Naturalists from the Central Piedmont Chapter to sample two vernal pools on the Cumberland State Forest. As one of their citizen science projects, the group usually monitors pools at High Bridge Trail State Park near Farmville. The park is closed this spring for repairs to the bridge, so Master Naturalists Al and Betsy Lookofsky approached State Forest staff about the possibility of monitoring pools on the Cumberland instead. Forester Shannon Lewis provided a map showing several pool locations, and the group chose two sites to monitor every other week from late February through late May. They will send their data to Dr. Sujan Henkanaththegedara, a biology professor at Longwood University.

For each pool sampled, the team took pH, air and water temperature readings, and measured the pool’s maximum diameter and depth. These measurements vary with rainfall over the winter and spring. In very dry years, pools may fill late or dry out early, and this affects the reproductive success of the amphibians that breed there.

The volunteers carefully picked through samples scooped from different areas of the pools, noting the species of amphibians and the presence of other organisms, such as aquatic sowbugs and chironomid midge larvae. On this sampling date, they found marbled salamander larvae (hatched in fall) and many spotted salamander egg masses (newly deposited). I was hoping to see some fairy shrimp, but alas, there were none.

Fairy shrimp, as well as several salamander and frog species, are considered vernal pool obligates, meaning they generally require vernal pools for reproduction, and their presence is an indicator of a true vernal pool. Spotted salamanders are one of these obligates. Their gelatinous egg masses are easy to spot – they may be clear, milky, or even green when colonized by a specific type of algae.

Marbled salamanders are another obligate species. By the time the other amphibians arrive in late winter, marbled larvae usually have a head start. That’s because the adults actually lay eggs in the fall, under logs or leaf litter in the dry pools. The females guard the eggs until rains come; if the pool fills late, the eggs can overwinter and hatch later. The larvae we found were already a couple of inches long, sporting obvious frilly external gills.

Because vernal pools serve as critical habitat for so many species, it’s important to be aware of and careful with them. Pools are vulnerable to many threats, such as development, pollution, and climate change. Although Cumberland is a working forest, the VDOF foresters are careful to protect vernal pools and the adjacent woodlands, noting their location on forest maps so they won’t be accidentally impacted by forest management activities. The presence of these pools could easily go unnoticed, highlighting the importance of landowners becoming very familiar with their own woods in order to protect natural features like these.

Occasionally, other bodies of water can function as vernal pools. Recently, at Mint Springs Valley Park in Crozet, I came upon a chorus of wood frogs (usually vernal pool obligates) calling from what appeared to be the stone foundation of an old building. Several frogs dove for cover when I approached, and the water was full of wood frog eggs, which look like clumps of floating grapes.

If you want to see egg masses or larvae, put on your boots and check out the lower spots in your woods. But hurry! In a few months the pools will dry up, and the critters will crawl off into the surrounding forest until next year’s Spring Break pool party.