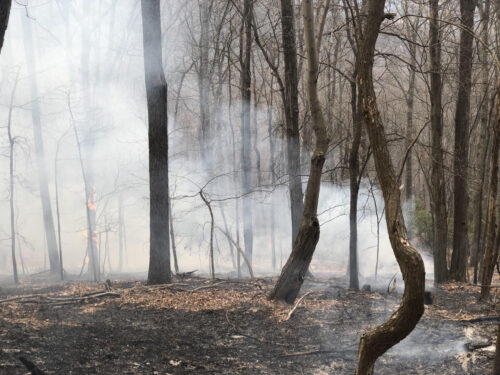 On March 9, a wildfire was reported in southern Albemarle County — VDOF and local partner agency Albemarle Fire Rescue responded to the scene. By March 11, suppression efforts had contained 75% of the fire but more than 320 acres had burned. The crews continued suppression operations into the early evening and performed mop-up and spot checks in the following days. As of March 12, the fire was 100% contained.

During operations on March 11, VDOF’s Director of Human Resources Hector Rivera visited the Command Post for the fire and reported back.

“Fred Turck [VDOF fire program staff] escorted me to the Command Post where an incident brief was provided. I could feel the motivation and could immediately asses that logistic operations supporting our professional firefighters has ensured reconstitution operations don’t miss a beat, thus keeping our mission on task,” said Hector.

When responding to wildfires, VDOF firefighters follow an Incident Command Structure in which each person has a distinct role. Response crews can vary in size – for Fan Mountain fire, roughly 30 full- and part-time firefighters worked the fire.

Following the briefing at the Command Post, another VDOF employee escorted Hector to the site of burnout operations. Hector said, “Once on site, I was genuinely amazed about the work our full-time and part-time firefighters were doing in unison, and the expertise displayed by part-time support in this fire – demonstrating we are ‘One VDOF Wildland Firefighting Corps.’

“Upon arriving at the burnout site, I was greeted by one of our part-timers, who gave me an on-the-job-training lecture for managing the drip-torch — I suited up and managed to light up part of the line. Later, in a span of minutes, a hotspot jumped the line, and the team immediately acted to contain the fire.”

Hector took photos of the crew working, including the dozer and engine assets at work. “I diligently stayed out of the way to observe the professionals do their job. It was neat to see our strong women, such as [VDOF employee] Sarah Parmelee, leading from the front.”

Teamwork is important in nearly every work situation, but it is especially critical when it’s a matter of protecting life, property and land. “My time on site reminded me of how important it is for us to never forget the work our teammates do to protect our land and its people. Today, was yet another example of why we are blessed to serve in VDOF and with such an outstanding group of professionals. Great job, and stay alert!” said Hector.