The Early Caterpillar Gets the Leaf! 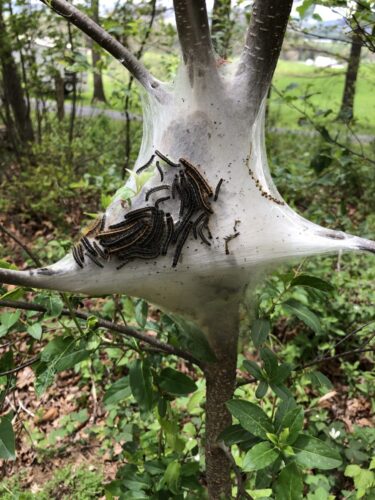 Spring is a welcome season for many living things, signaling the end of cold weather and resurgence of color through plants blooming and leafing out. This period of awakening also means that insects emerge and utilize tender foliage for their own development. Forests support many insects throughout their life cycle, but some Lepidopteran species (butterflies and moths) are called early season defoliators, meaning they feed on trees early in spring just as the leaves come out.

Three native early season defoliators – fall cankerworm, eastern tent caterpillar and forest tent caterpillar – can cause alarm when their feeding strips trees of their leaves. But these native insects have co-evolved with their host species, and they only cause mortality when high populations feed on trees for consecutive years. In most cases, no control is necessary, as natural predators tend to keep populations below damaging levels. However, gypsy moth, an invasive species introduced from Europe, is an early season defoliator that can reach damaging levels and cause large areas of defoliation when left unchecked.

Despite their name, fall cankerworm caterpillars emerge in early spring after females lay eggs on branches in the fall. These small caterpillars feed on many species of hardwood, including oaks, maples, black cherry, and beech. They can vary in color between light green with white lines down the back to brownish green with a black stripe down the back. Frequently called inchworms for the way they crawl across surfaces, they can consume entire leaves, leaving only the major veins. Egg hatch co-occurs with bud break in late April to May, so the caterpillars are primed to consume young foliage immediately. In most instances, healthy trees can withstand a defoliation event from this insect. However, when consecutive years of defoliation occur, or in urban settings where trees can be under other stressors, mortality can occur if outbreaks are not managed. 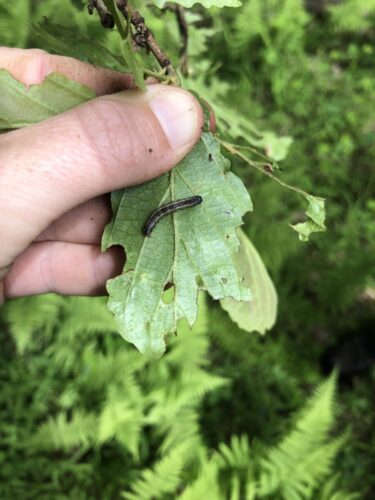 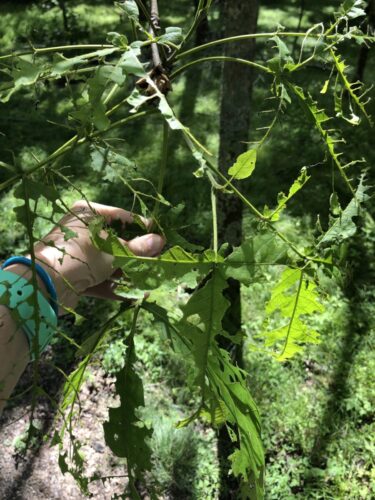 Easily spotted by the silken tent created in branch crotches of cherry, apple, and crabapple trees, this caterpillar is frequently noticed in early spring. As buds begin to open, these caterpillars hatch from egg masses laid on host trees at the end of the previous season. Small caterpillars stay together and form a web-like tent at the union of branches on trees they will soon defoliate. The larvae are hairy, with a white stripe running down their backs. Unlike some hairy caterpillars, they will not sting if held or touched. They feed in the morning or evening, avoiding the heat of the day. Though trees they feed on look completely defoliated, most will recover and produce a new flush of foliage after the caterpillars have dropped to the ground to pupate.

Unlike the eastern tent caterpillar, the forest tent caterpillar does not form a true tent. Instead, caterpillars form a silken mat on large branches or the main trunk of trees. Host plants include oaks, blackgum, basswood, and other hardwood species. These insects emerge as buds swell and break, and they feed on larger leaves as they grow. They are also hairy caterpillars (that won’t hurt to touch); however, they have a pattern on their backs that some say looks like keyholes, penguins, or footprints. (I think footprints – plus, F for footprint and F for forest helps me remember the difference between forest and eastern tent caterpillars!) No management is required, as most trees recover from defoliation events and natural enemies help to control populations. 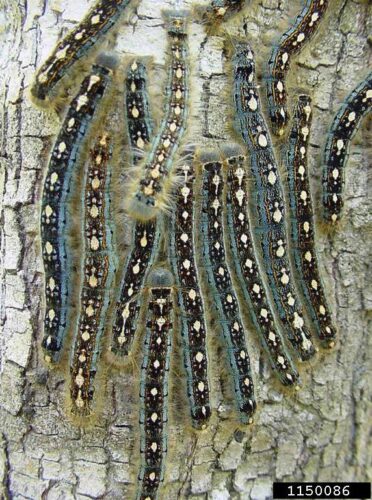 The European gypsy moth was accidentally introduced in Massachusetts in the late 1860s. It is a highly problematic caterpillar that has a large host range and can reach damaging population levels quickly when conditions are right. White oak is a preferred host, though most other oaks, maples, poplar, birch, and even some conifers will also be consumed. Healthy trees can usually survive a year of defoliation, but often outbreaks of gypsy moth can last multiple years and stress trees to the point of mortality. Females lay rust or tan-colored egg masses on tree trunks or other flat surfaces in the fall, and caterpillars hatch in spring. They do not form silken tents like the forest and eastern tent caterpillars. Like these caterpillars, they are hairy, but one key distinction is that gypsy moth caterpillars have a pattern of five pairs of blue dots followed by six pairs of red dots on their backs. Since this pest is non-native, there are no specific co-evolved predators that keep populations below damaging levels in outbreak years. For landscape trees, or in areas where large areas of trees are at risk, control is recommended. 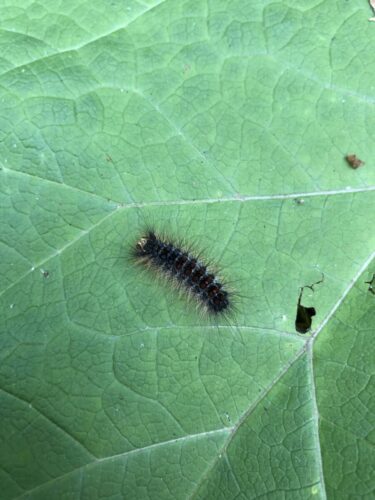 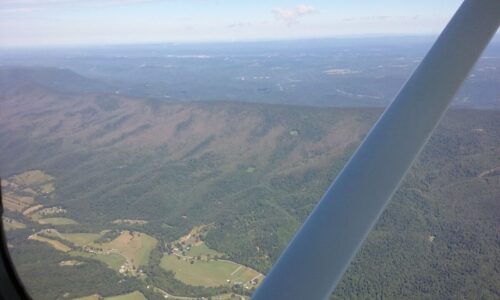 For more information about these early season defoliators, and other forest health issues, please check out the VDOF Tree and Forest Health Guide.