Field Notes: The Early Shrub Gets the Sun 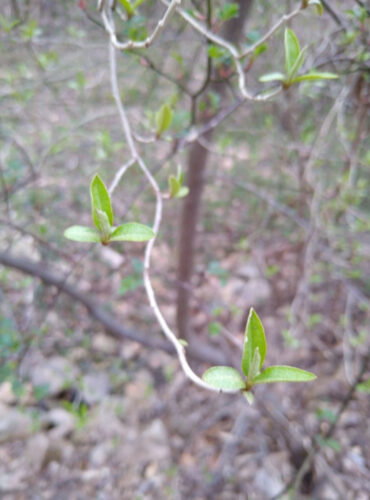 With recent warm weather, Virginia’s woods are greening fast. After a dormant winter, plants gear up for photosynthesis again, using carbon dioxide, water, and sunlight to make food. You might be familiar with some early spring wildflowers that emerge on the forest floor, taking full advantage of the leafless canopy to gather some sun of their own before being shaded out by trees. Unfortunately, the shrub layer in many Virginia woodlands is full of some sneaky sun stealers – invasive plants.

Several of our most problematic invasive shrubs are among the first plants to leaf out in spring. What’s more, they often lose their leaves later than our native woody species. One study from Penn State estimated that invasive shrubs may get more than two months of additional growing time, when you add up their extra spring and fall leafiness. This gives the shrubs a competitive edge over native shrubs. Early leaf growth can also shade out understory plants that already have a pretty short window of opportunity to gather sun.

In March, the most obvious invasive shrub in the Charlottesville area is autumn olive (Elaeagnus umbellata). The silver-backed leaves give a pale green haze to many an understory, showing us just how prolific this shrub is. Soon after leaf-out, autumn olive’s sickly-sweet fragrance will permeate the woods, followed in summer and fall by silver-dotted red berries.

Chinese privet (Ligustrum sinense) is semi-evergreen in central Virginia, usually retaining a few winter leaves. By March, abundant new leaves are well on their way. Privet is another invasive whose flowers (in June) have a cloying scent and whose berries attract birds. In this case, the berries are dark blue and linger into early winter.

Multiflora rose (Rosa multiflora) is the prickly bane of many trailsides. It often grows in fairly shady areas, but this early leafer has little competition for sunlight in March. This shrub spreads not only from seed, but by spreading from the roots and stem tips that touch the ground. It can form dense thickets that are impossible to walk through without bloodshed.

Some of the bush honeysuckles (Lonicera spp.) bloomed in late winter, well before the leaves appeared, but the shrubs are greening up now. The related Japanese honeysuckle (Lonicera japonica) vine is mainly evergreen but puts on a flush of new growth in spring. Although evergreens may not actively grow in winter, some continue to put on root growth, and they are definitely ready to go earlier in spring than their deciduous neighbors. Other evergreen invasives include English ivy and wintercreeper euonymus.

You can learn more about invasive shrubs and vines from Blue Ridge PRISM’s fact sheets. PRISM stands for Partnership for Regional Invasive Species Management; this very active nonprofit uses education and hands-on efforts to stop the spread of invasives. VDOF’s Common Native Shrubs and Woody Vines also includes a “top ten” section of invasive species. Spring is the perfect time of year for learning to identify these pesky plants. Know them – DON’T grow them!