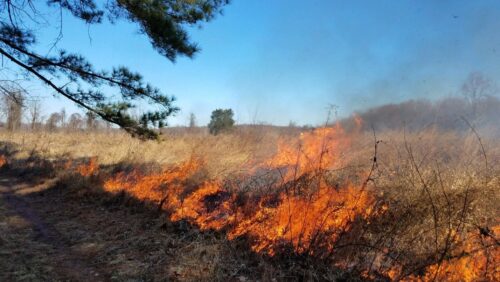 “A prescribed fire is like a wildfire that happens backwards – meaning, the fire practitioners are able to assess the site, plan for weather, install firebreaks and assemble the necessary crew and equipment, all in advance, before any fire is on the ground. Once the burn plan has been written and the equipment is ready, there is nothing to do except wait for the right weather.” said area forester Sarah Parmelee.

Weather is critical to prescribed fire because it effects how the fuels will burn and where the smoke from the fire will go. Weather that’s best for conducting a prescribed burn consists of moderate humidity and surface winds that will allow the fuels to burn without getting out of hand.

Sarah said, “You need a certain atmosphere to support a safe, effective prescribed burn. During the day, weather should allow smoke to rise and dissipate. A cool, humid ‘recovery’ period during the night will reduce the risk of the fire rekindling. Days in late winter or early spring are typically ideal for prescribed burns because the days can be relatively warm and dry with favorable winds and atmosphere, while the nights are still quite cool and moist.” 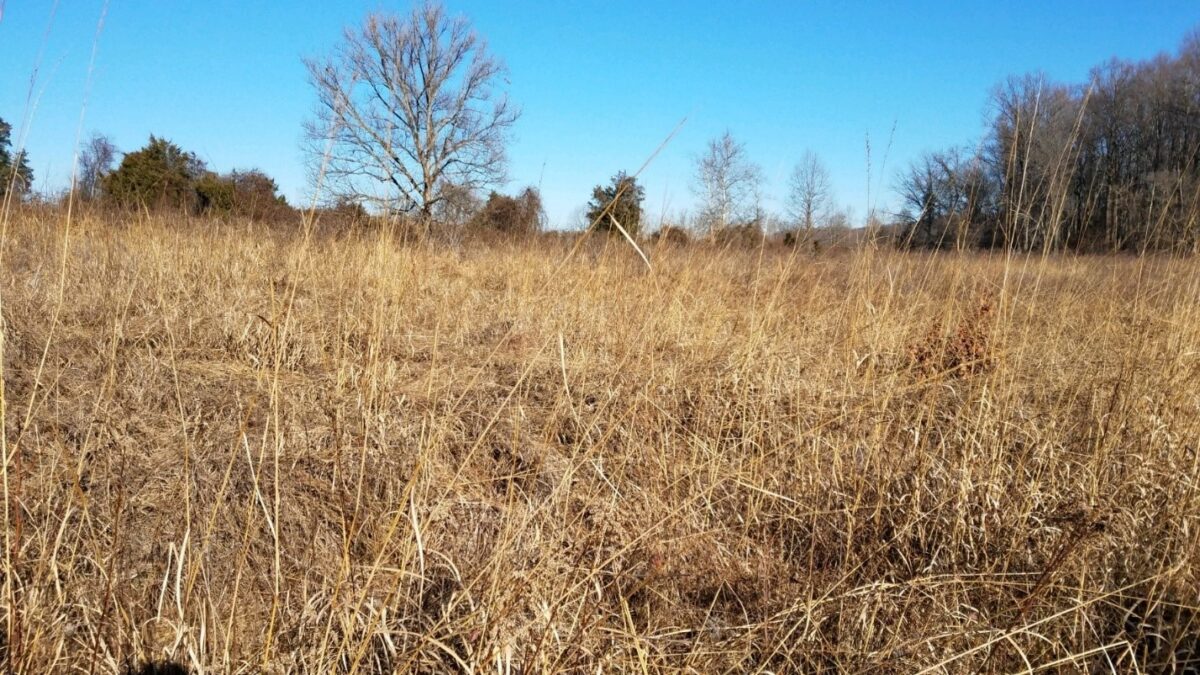 The Field the morning before the fire.

On January 22, VDOF staff determined that the weather was favorable to burn the Field but not the Shortleaf (pine) unit. Because the Field is composed largely of native warm season grasses, it could be burned on a day with higher relative humidity, lower winds and cooler temperatures than the Shortleaf stand, which has some grasses but more woody and brushy materials.

“VDOF has many prescribed burns planned this spring on private and state owned land, so even though the weather on the 22 was not appropriate for both units, the decision was made to burn the Field and return to burn the Shortleaf at a later date.” said Sarah.

The morning of the fire, the burn crew gathered at the Warrenton office to assemble materials, such as drip torch fuel (a mixture of diesel and gasoline), drip torches, flappers (a suppression tool that is like a mudflap on a mop handle), leaf blowers and water.

Two brush trucks with water and off-road capabilities would be on site during the fire, but due to the near-freezing temperatures, water was not the preferred method of control and suppression. The VDOF bulldozer was also prepared for the fire; the bulldozer is not always necessary to have on standby for prescribed fires, but there were several snags (dead standing trees) both in and adjacent to the Field that might catch fire and need to be pushed over. Because the bulldozer would be on site, the operator could also contain any escaped fire if the cold temperature did prevent the use of the water resources.

Once the preparations were made, the crew convoyed to the Whitney State Forest. The suppression equipment was staged where it could be readily used, but not at risk of being in the way of other equipment or the fire. Warrenton Fire Department provided an attack engine (a brush truck with additional equipment and water) to standby on scene. At 11:00 AM the weather was predicted to be ideal for the fire, so at 10:45, the crew gathered for a final briefing covering safety, weather, assignments and methods for conducting the fire. Per VDOF policy, all fire practitioners were wearing the proper Personal Protective Equipment (PPE). This includes nomex clothes, helmets, gloves, goggles or safety glasses and, most importantly, a fire shelter to use only in extreme emergencies. 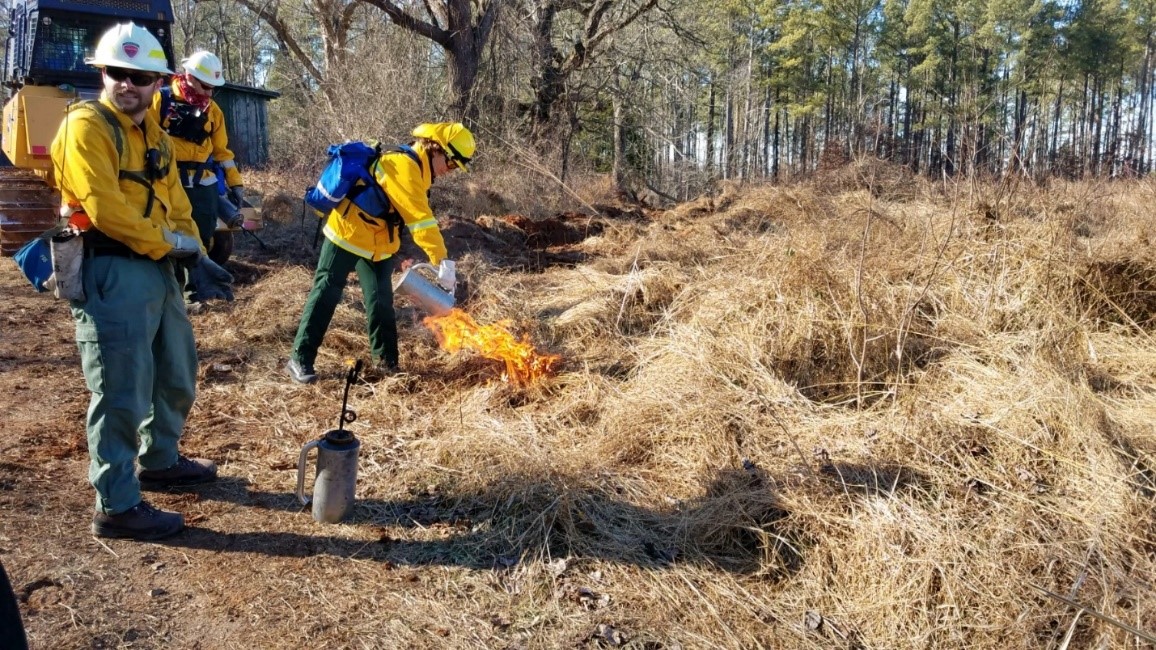 Lighters ignite the small test fire area at the start of the burn.

A small test fire was lit to see how the fuels (i.e. the grasses) would burn and help determine the strategy of the Ignitions Crew for the burn. The Ignitions Crew would be responsible for lighting the fire while the Holding Crew would be responsible for keeping the fire within the unit. The Incident Commander (IC – the person in charge of the whole operation) would float between the two teams and act as a lookout. 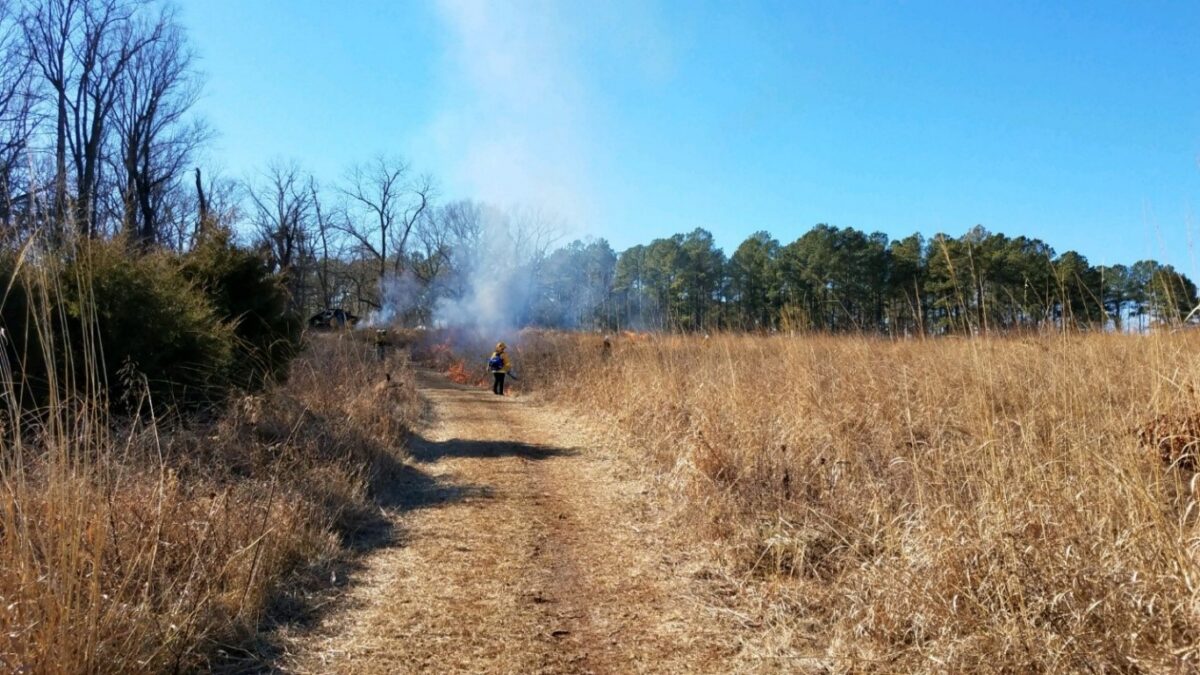 Blacking out the downwind fire break.

The cooler weather meant that the ignitions boss could use three lighters (people with driptorches putting fire on the ground) at once in order to build enough heat for the fuels to burn. The ignitions boss and IC had determined that “strip-head fire” would be the appropriate ignitions pattern. Head fire is when fire runs with the wind and can be very hot, fast and difficult to control. In a strip-head patter, lighters light strips of head fire parallel to each other so that no one head fire can travel very far before reaching “the black” – a burnt area where the fuels have been consumed. The black is an important tool for fire practitioners because it acts as an additional fire break.

The crew started at the downwind side of the Field so that as they burned, they “blacked out” the most vulnerable (downwind) fire break, making it more secure. They were then able to strip fire back through the Field until all the fuels had been consumed. 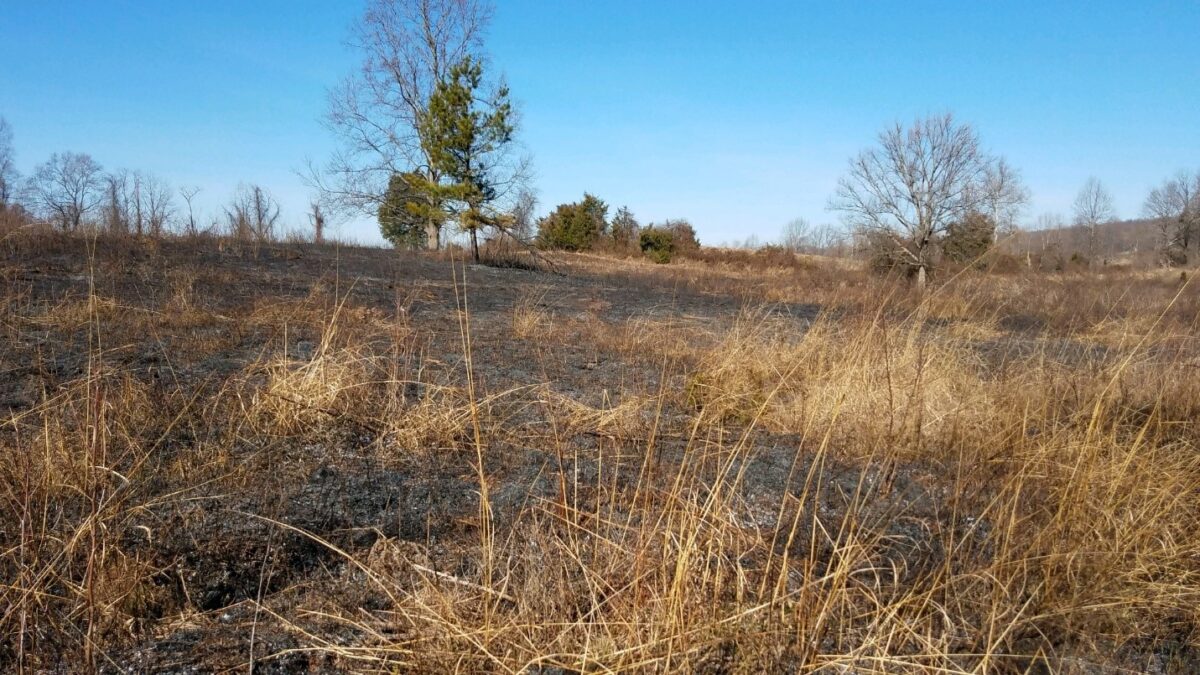 The Field after the fire.

Following the burn, Sarah reported, “Even though fuel consumption was spotty in places, the overall effect of the fire was satisfactory. It is worth noting that some patchiness in fuel consumption is not bad and increases the diversity of the site. Patchiness in winter burns also provides habitat for wildlife until the grasses in the field grow back in the spring.” 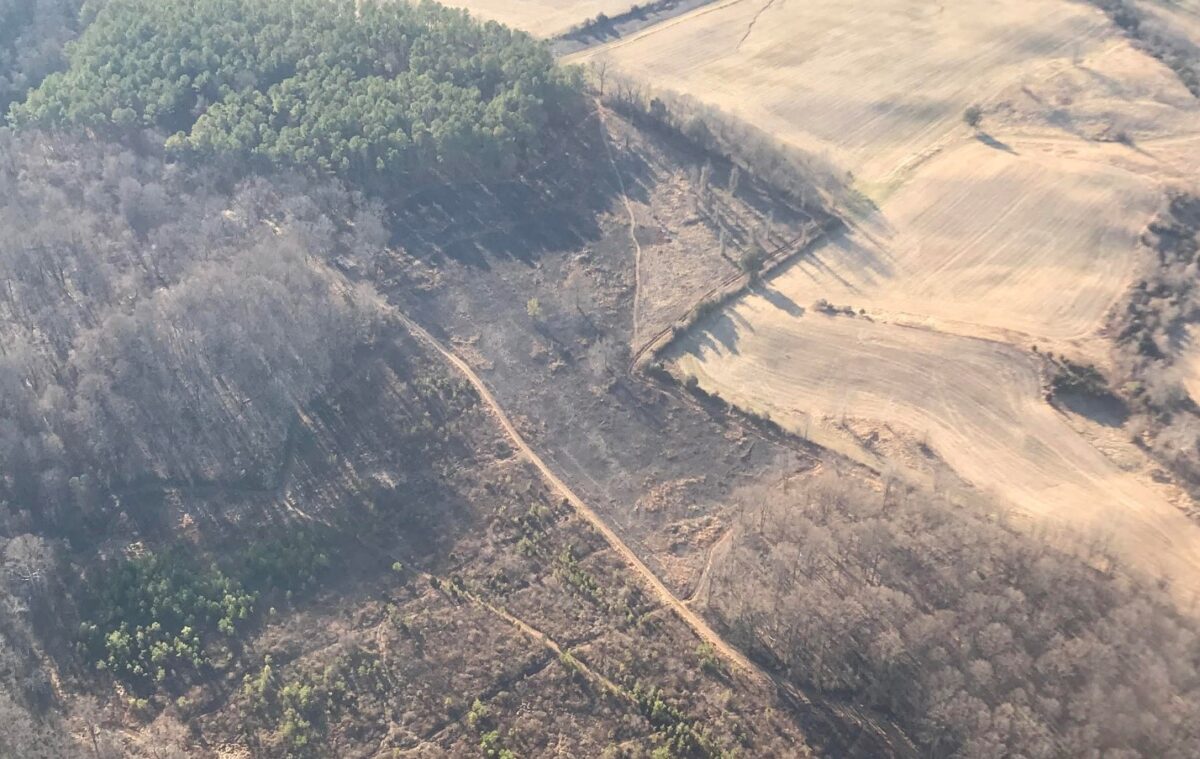 A bird’s eye view of the Field, post fire.

The Whitney State Forest remained closed for the rest of the afternoon and the Field was patrolled the next morning for any hotspots, of which there were none.

VDOF anticipates burning the Shortleaf unit in late winter or early spring, during which the Whitney State Forest will again be closed for the day until it is safe for the public to return.