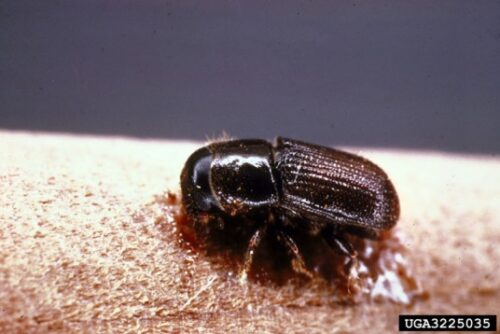 The southern pine beetle (Dendroctonus frontalis) (SPB) is a small, seemingly innocuous beetle that brings new meaning to the phrase “small but mighty.” These beetles are known as the most destructive native forest insect in the Southeastern United States. While a single adult beetle is only about 1/8 inch long, the ability to aggregate quickly means these tiny insects can overtake a pine tree’s defenses in a short period of time. All species of southern pine are targets for SPB but favorite hosts include loblolly, shortleaf, Virginia and pitch pine. 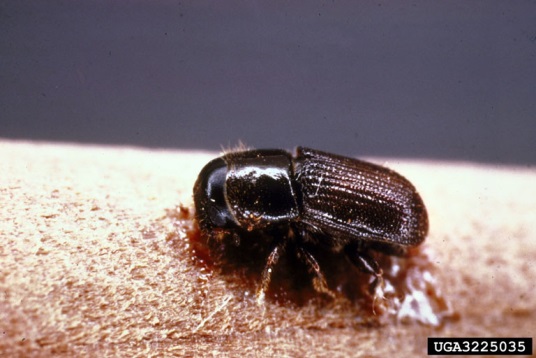 Females emerge first in the spring and fly to a suitable host where they bore into the tree and start creating their infamous “S”-shaped galleries in preparation for laying eggs after mating. Shortly after, they emit a pheromone (think seductive bug perfume) and the masses begin flocking to the suitable host tree. Each female is prolific with her egg production, producing upwards of 150 eggs over the course of her life! These eggs are laid in the galleries where the developing larvae then feed on the inner bark. As trees are killed or fill up with beetles, the outbreak spreads to neighboring trees and continues until suitable host material is no longer found or control measures are taken. 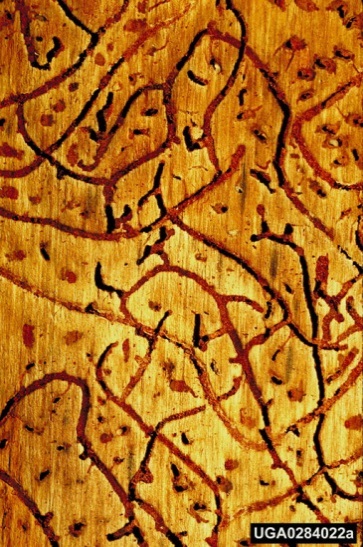 Historically, outbreaks of these destructive insects have been cyclical, occurring on average every five to seven years. Since they are native, they have a predator complex which helps control the populations and regulate outbreaks. However, since the early 2000s these outbreaks have been less common and almost non-existent here in Virginia. Many factors may contribute to the decrease in southern pine beetle abundance, including more intensive silvicultural practices, genetically improved trees and forest fragmentation.

The last big southern pine beetle occurrence noted in Virginia was first detected in 2012, and had become a full outbreak by 2014. This took place on Chincoteague National Wildlife Refuge. The U.S. Forest Service observed the outbreak in 2016 from the air, and documented an average of 46 active SPB spots per thousand acres of host type. The average spot size calculated to be 1.5 acres. When a ground check was done, all spots visited had active adult, larvae and eggs, indicating that the population was still thriving. This area was hit particularly hard due to many factors: most of the pine was over-mature, overstocked and stressed from saltwater intrusion leading to a beetle buffet, ripe for the picking!

Unfortunately, no control efforts were enacted and the population continued to spread and the outbreak ultimately died out on its own. VDOF Forest Health staff flew the impacted area in October of 2018 and mapped 475 acres of pine mortality. 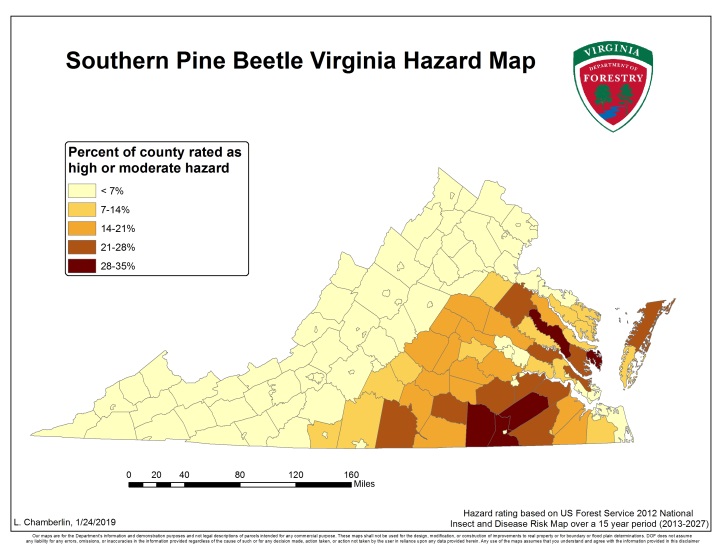 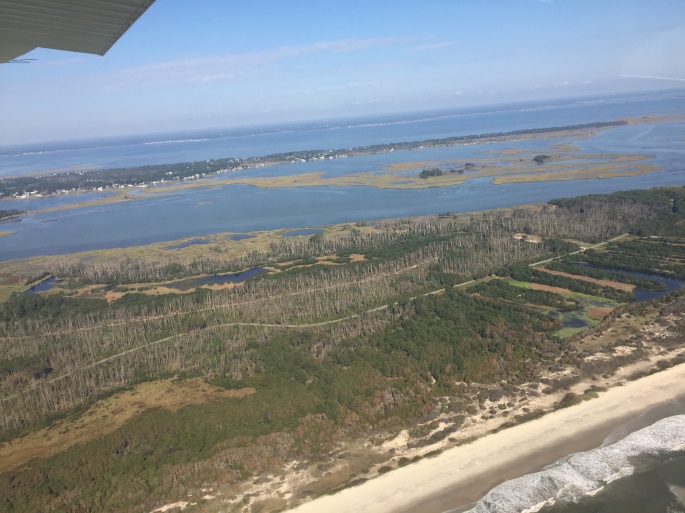 To monitor populations and predict future beetle spots, each year VDOF Forest Health sets up traps that are baited with pheromones mimicking the ones produced by females and stressed trees throughout the state. Trapping starts in spring, around the time that beetles would start looking for suitable trees. Last year, we trapped in 10 counties, placing a total of 24 traps around the state. VDOF foresters and Virginia Department of Conservation & Recreation employees sample each week and VDOF Forest Health sorts the contents, counting the number of SPB caught as well as their associated natural predator, the clerid beetle. The good news for Virginia is that our SPB population levels continue to persist at low and static levels! We will continue to monitor these insects and their activity (or lack thereof!) and trapping efforts are planned for spring of 2019.