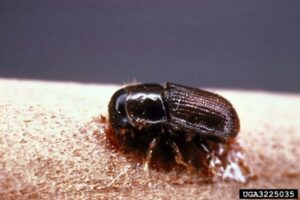 February 22, 2019 - The southern pine beetle (Dendroctonus frontalis) (SPB) is a small, seemingly innocuous beetle that brings new meaning to the phrase “small but mighty.” These beetles are known as the most destructive native forest insect in the Southeastern United States. While a single adult beetle is only about 1/8 inch long, the ability to aggregate quickly means these tiny insects can overtake a pine tree’s defenses in a short period of time.... Read More 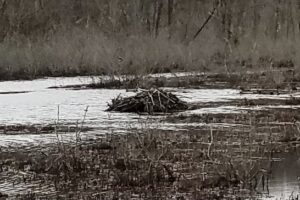 April 5, 2018 - by VDOF Area Forester Lisa Deaton Wildlife and Clearcuts Part 2 A beaver hut in the middle of a pond or swamp is a familiar sight.  The one above is located in Beaverdam Swamp in Gloucester County. While mapping a creek for another Riparian Buffer Tax Credit application, I had the opportunity to see a number of signs of beaver activity alongside a clearcut. First, I came across the beaver... Read More 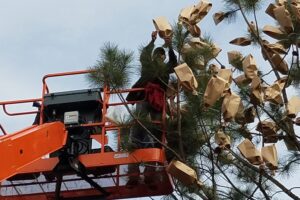 March 15, 2018 - by VDOF Senior Area Forester Scott Bachman It is not quite spring, but the signs of spring are abundant at the New Kent Forestry Center.  The photo below shows one of the first signs of spring.   The loblolly pine trees appear to have grown paper bags on their tips!  These contractors are placing bags on the trees to protect the soon-to-be receptive pine flowers (Strobli) from wind-blown pollen.  That... Read More 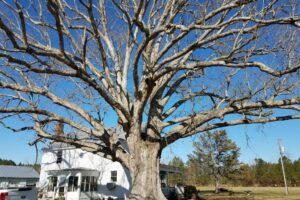 March 7, 2018 - Big Trees and Little Trees by Area Forester Lisa Deaton   Lately we have been recertifying trees for the Virginia Big Tree Register.  Trees on this register are checked every ten years to see if they are still alive, and if so, remeasured.  The swamp chestnut oak above is located in Mathews County.  It is 6.5 feet in diameter and 96 feet tall We have also recently encountered a number... Read More 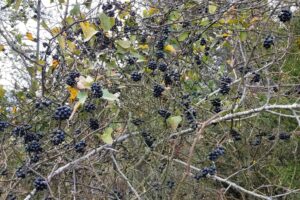 February 21, 2018 - Owls and Berries by Area Forester Lisa Deaton Last week began with finding an owl pellet in my yard.  Lately I have been hearing the call of great horned owls.  In the past, we have seen barred owls and eastern screech-owls. There are many good branches on the loblolly pine directly overhead for an owl to perch and digest a meal. I took a second look at the pellet after... Read More 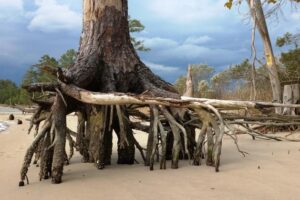 January 31, 2018 - by Area Forester Lisa Deaton Those Hidden Roots Homeowners often contact our local Department of Forestry or Virginia Cooperative Extension offices when they are worried that a yard tree might be diseased or dying. This loblolly pine (above) is located on the shore of a tidal creek that flows into the Chesapeake Bay.  The needles and branches in the top of the tree have been dying for the past several months.  We... Read More 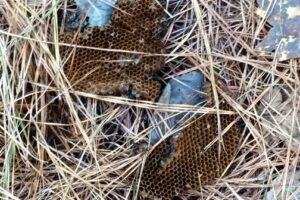 November 8, 2017 - Snack Time by VDOF Area Forester Lisa Deaton Last week I was asked to see if a 16-year-old loblolly pine plantation had grown large enough for a commercial thinning. I was perplexed to find what looked like pieces of honeycomb on the ground.  There were no large hollow trees nearby, just young, solid pine trees. Then I noticed that there were several pieces of it scattered around a nearby hole... Read More