Ghosts of Forests Past 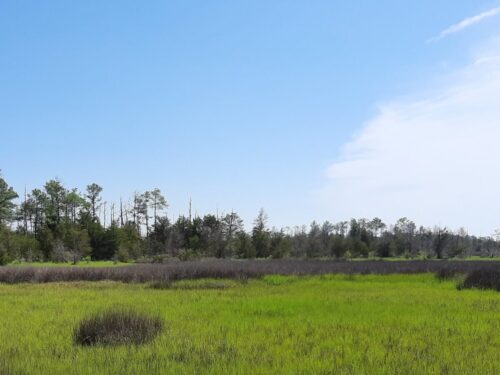 In eastern Mathews County, on the Chesapeake Bay, near the community of Diggs, sits a patch of woodland called “Old House Woods.” It is probably one of the most haunted places in Virginia, the subject of legends and spooky tales. Numerous locals claim to have seen ghost ships floating overhead, ghosts of British Revolutionary War soldiers digging for gold, headless cow ghosts, and a ghostly woman wandering the woods. However, there is another ghost story occurring here – the tale of the ghost forests. 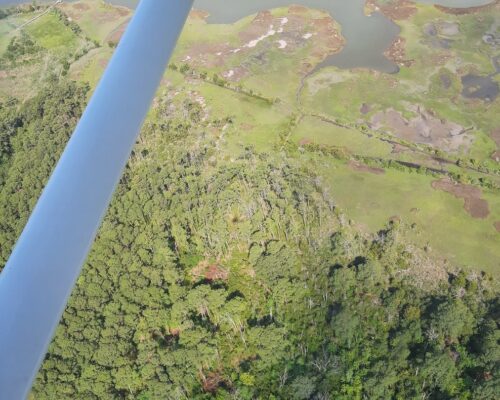 Dead pines near the coast, seen from above

One hundred years ago, many of these coastal areas were farmed. Old plow rows and fence lines are still visible from the air. When the land became too wet to farm, trees – mostly loblolly pines – sprouted and grew. Loblolly pines are surprisingly salt-tolerant, but they can succumb to a perfect storm of multiple stressors. Accelerated rates of sea level rise, inundation of salt water from high tides and coastal storms, southern pine beetle outbreaks, wildfires, and the invasive reed Phragmites have all taken their toll on the pines’ ability to survive. 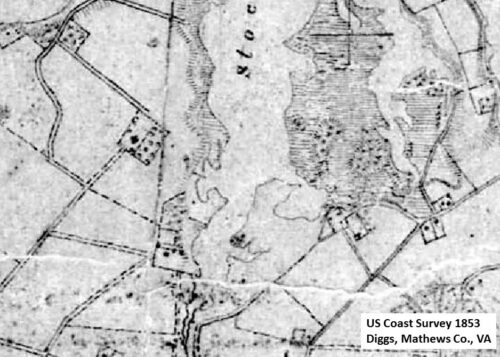 This 1853 map shows forested areas along a tidal creek near Diggs.

A commonly overlooked concern is the impact of ghost forests on the forest landowner. Many of the areas affected are privately owned lands that have been passed down through generations. The land is no longer suitable for development due to wetland regulations, so selling the land is not always a viable option. Harvesting the timber while the trees are still alive is tricky due to the saturated nature of the soils.

Loblolly pines aren’t the only coastal trees that can be damaged by saltwater intrusion. Atlantic white-cedar, an important wetland species that has become less common in Virginia, is also susceptible. Over the years, VDOF’s Sussex Nursery has refined its production methods for Atlantic white-cedar, and the nursery grows seedlings for re-establishment in the Great Dismal Swamp. Last fall, the nursery provided white-cedar seedlings for Christopher Newport University professor Rob Atkinson and his students to study the trees’ response to salinity. An interesting facet of this project was a collaboration with high school students to engage them in practical science. This June, their research was featured at the Fear to Hope Coastal Resilience Symposium, where the students were able to meet natural resource professionals and learn more about using science to address climate challenges. 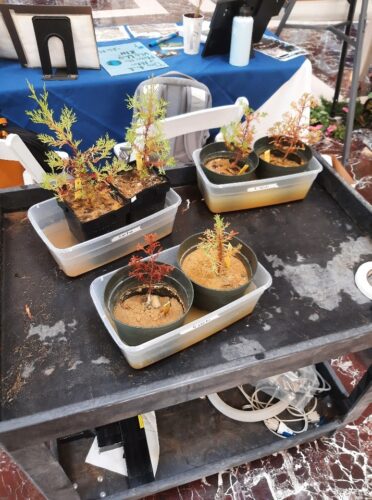 Whether loblolly pine, Atlantic white-cedar, or some other species, the future of our coastal forests is far from clear. But there is a bright side to the ghost forest issue. Tidal marshes in many areas are expanding as the forests recede. Marshes provide unique habitat for shorebirds, songbirds, invertebrates, amphibians, reptiles, and fish, and they serve as a buffer against storm damage. It remains to be seen if the marsh expansion can keep pace with sea level rise. We are witnessing one ecosystem becoming another ecosystem, each with its own set of benefits. The only constant in nature is change.